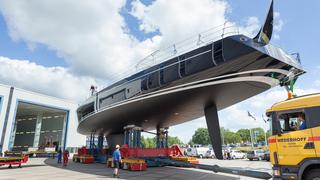 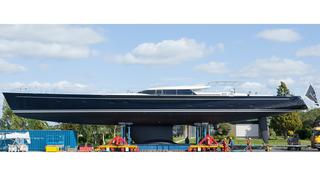 Royal Huisman has launched the 43 metre sailing yacht Sea Eagle, which is now en route to Taiwan to be delivered to her owner, Dr. Samuel Yin.

At 43.31 metres LOA, the sloop-rigged luxury yacht features naval architecture by Germán Frers and interior design by Rhoades Young Design. She is striking with a gleaming dark blue hull paired to a “Chevy White” superstructure.

Royal Huisman announced the signing of the new order for a 43 metre yacht in January 2014, with the contract signed on New Year's eve, 31 December, 2013.

Sea Eagle’s experienced owner, Dr. Samuel Yin, plans to use the yacht for cruising the world and competing in a few superyacht regattas along the way. Sea Eagle draws 4.5 metres and displaces 203 tons. She should have a hull speed of 15 knots.

Royal Husiman told Boat International during a recent visit to the yard, “The owners will cruise the Caribbean and Mediterranean, and maybe [sail] the Far East after exploring the world.”

Dr. Yin is a prominent Taiwanese businessman and philanthropist who founded the Tang Prize Foundation, a biennial science prize aimed to be on par with the Nobel Prize and “encourage more research that is beneficial to the world and humankind, promote Chinese culture, and make the world a better place.”

This marks the Dutch yard's first order in the ever expanding Asian superyacht market. It is a base that Royal Huisman has sought to develop business in for a number of years, working to increase awareness of its brand in the region and develop a local industry network.

The latter included appointing Regional Liaisons, such as Bart J Kimman, director of Northrop & Johnson Asia, who helped to work as liaison between Royal Huisman and the client during the order negotiations for Sea Eagle. Kimman continues to offer support of Royal Huisman's growing presence in Asia.

Wisp: a winning combination of superyachting and sailing