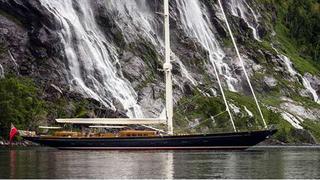 Royal Huisman superyacht Wisp has completed a successful maiden voyage to the Mediterranean.

Royal Huisman launched the 48-metre superyacht Wisp, designed by Hoek and Rhoades Young, in February. She left The Netherlands for the fjords of Norway, before heading south for the Med.

Reports back from the owner’s representative following the trip were overwhelmingly positive: “It has been an absolute pleasure to be part of the Huisman family, and a dynamic and focused project team. Together we have exceeded the expectations of the client with exceptional standards and we can all be duly proud of the beautiful vessel Wisp.”

The yard said the boat fulfilled the brief as a supremely comfortable cruising yacht more than capable of handling some “gentleman’s racing”. The 252-ton vessel boasts a 14-knot top speed that might belie her traditional lines. Two other features not obvious from her classic looks are Wisp's 57.5m carbon composite mast and aluminium hull.

The yacht has a stunning interior, using stained light oak with wengé, as to the owner’s tastes, and Royal Huisman have even taken care over the grain of the cuts to enhance a feeling of calm on board. The brief for the interior was for a light, airy and calming ambience in which to travel the world – a style the owner summed up in the word “jolly”.

Jonathan Rhoades commented, “From an architectural point of view, we created an unusual open-plan interior layout that is designed in layers to reveal itself gradually.

“Below deck you are lead from space to space and at each destination the rooms feel resolved and complete. It is only on exploring further that you realise they open onto other spaces, until finally all the layers are peeled back to reveal salons and cabins with huge sightlines through the various deck levels linking the interior and exterior.”

The owner’s suite is just one example of this layering effect, he says, where various Japanese shoji screens bring in light to the full-beam cabin. Sliding aside double doors on the port side reveals a generous bathroom, with basins and bath made of green Costa Smeralda marble. The space develops further when curved aft doors are slid into their pockets to reveal an impressive rotunda with a domed ceiling. The owner’s library lies to port, with a walk-in wardrobe to starboard. A staircase sweeps up to the owners’ aft deckhouse that connects to their private cockpit. “As a whole, the owner’s suite is a fantastically light and airy retreat that maintains the flexibility of distinct areas for working, relaxing and sleeping,” said Royal Huisman.