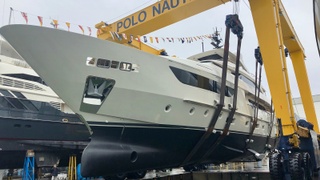 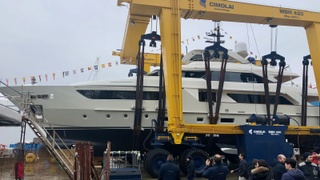 The launch of a 38 metre superyacht named Kia Ora has been announced by Sanlorenzo Spain. Launched at the Viareggio shipyard on February 1 2020, Kia Ora is the 20th hull in the successful Sanlorenzo SD126 series to hit the water.

The four-deck semi-displacement motor yacht is the largest fibreglass yacht produced by Sanlorenzo and is the flagship of the ‘SD’ semi-displacement range. The model seamlessly combines Sanlorenzo’s heritage lines with technological innovations and impressive autonomy at sea.

Sold by Director Andy McDougall in January 2019, Kia Ora has been extensively customised for her experienced owner. She has been designed with extensive cruising in mind and her five cabin interior features unique characteristics and a distinctive layout, carefully tailored to cater to her owner’s changing requirements and evolving nautical vision.

Kia Ora is powered by twin MTU 12V2000M72 1469hp engines and is able to achieve a maximum speed of 16 knots. She has an impressive range of 3000 nautical miles when cruising at an economical speed of 11 knots.

The Best Photos of Sailing Yacht A