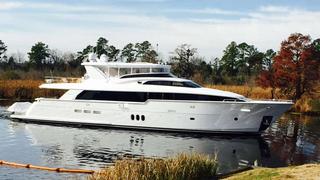 The second Hatteras 100RPH superyacht has been delivered to its owners.

Meanwhile construction started on the second Hatteras 100RPH motor yacht and the launch was initially planned for the latter half of this year.

The North Carolina yard reported on Facebook this week, “After several months 100RPH hull #2 is complete and making waves headed south. Congratulations to the new owners and welcome to the Hatteras family!”

Two other Hatteras 100RPH hulls are in construction, with delivery scheduled for 2015. Designed by Hatteras’ in-house team, the 100RPH boasts a large interior volume as well as generous outside living spaces, including a large sun deck with hardtop. The standard layout sees the owner and six guests accommodated in a full-beam master, VIP stateroom and two twin cabins on the lower deck. A fifth cabin can be added on the main deck in place of the large kitchen.

Hull No 1 is powered by twin 1,900hp Caterpillar C-32 engines, delivering a cruising speed of 19 knots and a range of 680 nautical miles. No further information is available as yet on Hull No 2’s set-up, but Hatteras are offering a ‘muscle’ version of the boat with twin 2,600hp MTU 16V 2000 engines and top speed of 29 knots.