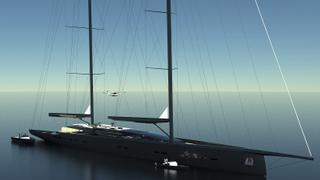 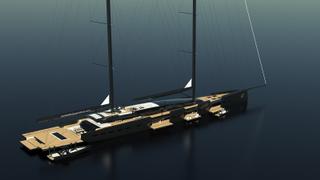 The former South African yachtsman of the year explains that talks are underway to build what would be the largest composite sailing yacht in the world.

“The genesis of the idea for the C300 started with an owner who was considering a much larger, state-of-the-art sailing yacht,” Carkeek said. “Now, I’m talking to one of the best builders in the world about how to build it and create a team around the project.”

Despite its imposing size, performance was a key aspect when designing the C300, with the aim of delivering the handling characteristics of a 30 metre sailing yacht. As a result, this two-masted colossus would be fitted with electric retracting pods.

Accommodation is for up to eight guests, while the crew quarters would house a staff of 15 people. The propulsion system has yet to be disclosed, however, the C300 should cruise at 20 knots under power and be capable of sailing speeds in excess of 35 knots.

“We understand the different demands for technology, performance and styling,” Carkeek added. “With our naval architectural expertise from the America’s Cup, Volvo Ocean Race and Grand Prix yachting we’re able to bring all of that experience and technology into the superyacht arena in a way that hasn’t been seen before. But it’s about the lifestyle aspect too, creating new ways of thinking about boats, how they’re used and how people feel on those boats.”