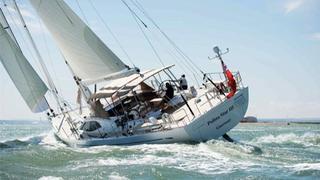 What caused a nearly new Oyster sailing yacht, Polina Star III, to sink in early July off the coast of Spain? According to UK builder Oyster Marine, the sinking – the first in the company’s 42-year history – might have been caused by the yacht hitting an underwater object the day prior.

A 27.43 metre version of the Oyster 825 series, Polina Star III was launched in May 2014. Oyster Marine reports that the yacht “suffered a serious incident which compromised the moulded hull” on July 3 and sunk the following day on July 4. There were five crew members on board who were rescued by the Spanish Coast Guard.

Oyster is now conducting an investigation to find the cause of the sinking of Polina Star III. Divers inspecting the hull of Polina Star III where she rests on the seabed have reported back findings that suggest the possibility of previous damage.

“The possibility of impact with an underwater object propagating structural failure has not been ruled out,” says David Tydeman, CEO of Oyster Marine. “Recovery of the vessel will facilitate further detailed investigation.”

As was seen with the loss of sailing yacht Cheeki Rafiki, previous structural damage that goes unchecked can lead to sinking.

Polina Star III is an extended Oyster 825, a 27 metre version of the standard 25 metre yacht. The design incorporates an internal structure not seen in any other Oyster yacht. In his statement, David Tydeman says that an independent expert in composite construction has analysed the design of the yacht and verified she has the appropriate safety factors.

Oyster is also investigating the structures and mouldings of the other Oyster 825 yachts, of which two are launched and three in build, but Tydeman says, “Oyster has no reason to believe that any other yachts in the range are in any way at risk.”

“The safety and integrity of all Oyster Yachts is our absolute priority at all times,” says David Tydeman. “We will do everything possible to establish the cause of this unfortunate loss. All Oyster owners can be sure that the company is fully committed to building the finest luxury yachts which are, above all, totally seaworthy in all conditions.”

"This is getting worse" - skipper's final words in Cheeki Rafiki sinking

Yogi: an exclusive look at the superyacht that sank in the Aegean Sea