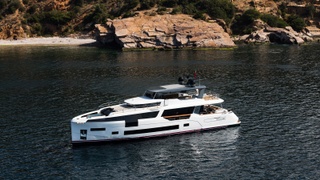 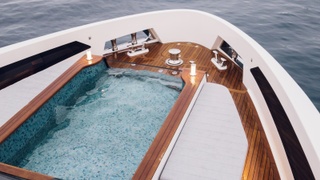 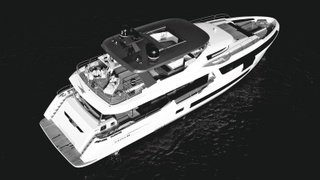 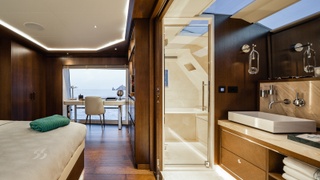 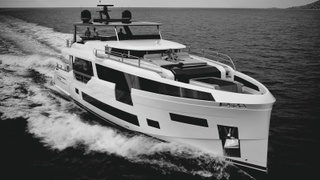 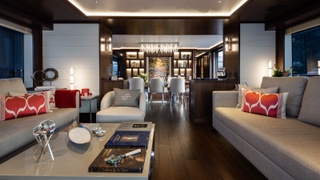 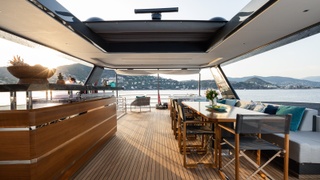 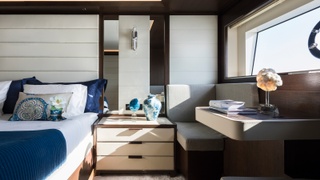 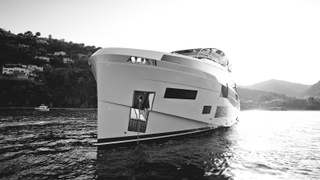 Germán Frers has somehow designed the new 27-metre Sirena 88 with five cabins and space to spare. Sam Fortescue looks inside the superyacht to work out how he did it.

I can't help it. I have to pitch right in with my favourite feature of the new Sirena 88. From the huge bed in the owner's suite, this yacht gives you an underwater view of the mosaic-lined foredeck pool through a glass bulkhead that sends dappled blue light all over the cabin. It’s simply glorious design in its own right, but on a boat of this size, it’s nothing short of genius.

In fact, there’s a lot about this yacht that punches well above its 26.8-metre stature. And that shouldn’t come as a surprise, since the young Turkish builder Sirena Marine has explicitly set out to do just that. “Sirena Yachts delivers superyacht solutions, comfort and quality to smaller size vessels,” says Ipek Kırac, CEO of Sirena Marine. But with the other two yachts in the range measuring up at 18.7 metres and 20.7 metres, the scope to push those imaginative features has been limited – until now. The Sirena 88 at last gives the brand a canvas big enough to paint on, with the promise of bigger projects to come.

To start with, this boat is the brand’s first tri-decker, and offers true cruising potential with a 2,100-nautical-mile range at nine knots. Add the optional extra 5,500-litre fuel tank and that rises to 3,100 nautical miles – enough to cross the Atlantic. Its features and interior finish all feel like a big step up from the smaller yachts, too.

In time-honoured fashion, Sirena has split the accommodation between guest cabins on the lower deck, showpiece entertaining space on the main deck, and an open upper deck social area. This arrangement gives the option of four or even five cabins and makes an impressive full-beam master cabin a reality on the main deck. Five cabins in a 27 metre? Well, this yacht has a deceptive volume to her, courtesy of the naval architecture and exterior design work of long-term collaborator Germán Frers. The renowned Argentinian designer is better known for sailing boats, so perhaps we shouldn’t be surprised that he’s managed to squeeze so much useful space out of the hull – an impressive 165 gross tonnes of it, in fact.

“The hull shape developed during the tank-testing programme for the Sirena line of motor yachts is rather unique, being efficient in a wide range of boat speeds,” says Frers. He’s referring to the fact that this planing hull can achieve 25 knots with its two 1,550hp MAN V12s going flat out, yet it is also capable of cruising along at nine knots consuming just 5.3 litres per nautical mile. “The extraordinary interior volume for a yacht of this size is also unusual, but today it’s possible to solve that volume-performance equation,” he adds.

The boat has a low superstructure that seems to hunker down into the high, heavy bulwarks. With a plumb bow, no visible side decks and the weight of the superstructure aft, the yacht has the looks of what Frers calls “a practical, rugged, seagoing vessel”. But those broad bulwarks serve a purpose, carrying frameless black glazing on its bevelled edge that brings light pouring into the yacht’s interior. There are more touches of big-boat flair, too, in the small wings that flank the wheelhouse.

Viewed in profile, the superstructure extends aft as far as the transom, with only a sliver of a bathing platform hanging above the water. This is deceptive, however. Swing the large transom door up and you reveal a continuation of the teak-decked bathing platform extending inside. Its 12 square metres provide plenty of room for some easy chairs and a lounger between the bulwarks of the twin staircases down from the main deck. It serves as a garage for a four-metre tender under way, assisted by the transformer on the stern.

There is plenty of other exterior real estate for guests to choose from. Aft on the main deck, you have a large U-shaped sofa with an imposing teak table that can seat eight with ease. The deck is sheltered by the overhang of the huge flybridge above, but the views are fantastic, with low bulwarks and just slim supports at the corners. The blackened glass of the saloon acts as a giant mirror in certain lights, giving a real sense of distance. Though the interior design by Dutchman Cor D Rover is clean and simple, this area is not without a few smart embellishments, including optional drinks fridges and outdoor grills in the two units stationed on either side of the wide sliding door into the saloon. “A lot of attention has been paid to storage space and inventive solutions have been created for this,” he says.

Undoubtedly, the main draw is the 55-square-metre flybridge, which is completely open air under a lightweight carbon-fibre hardtop. This is the yacht’s real playground – a potential party deck or a spot for some quiet relaxation with a sundowner in hand. Sirena has managed to include a teak-panelled spa pool, a large wet bar, freestanding chairs and a deep L-shaped sofa with another imposing teak table – all without the sense of cramming things in. The hardtop has an opening panel in the centre and there’s a true second helm station forward, replicating all the key navigational functions of the main bridge.

But it’s the raised foredeck, which provides volume for the owner’s suite below, that offers the most private spot on board. The huge sunpads here have the teak-edged dipping pool at their feet, and tucked behind the bow bulwarks is a spot where you could sit with a book, invisible to the rest of the anchorage. “There are very different areas to live on this boat. Many people can be aboard, but you still have your privacy,” says Kıraç.

This homely feel was a key part of the design brief for Rover, who has tried to create a “warm and inviting atmosphere”. He has brought in neutral colours in wood, fabrics and leather to offer three alternative interiors, described as contrast, warm and light – although the yard is at pains to stress that any design wish of the owner can be accommodated. Through them all, he managed to balance a sense of home with a range of high-end materials, luxurious fabrics and soft carpets in natural tones.

“Combined with the stainless-steel detailing, reflective surfaces and off-white hand-stitched leather, the grey oak in the design gives the interior a high-quality, contemporary look without being cold,” says Rover. “Comfort, style and attention to detail are achieved with craftsmanship behind the design elements.”

Much of the interior furniture is made by Sirena or its subcontractors, but there is also a sprinkling of well-known European brands including Minotti, Tribù, Hermès, Loro Piana and Dornbracht. Although it is the first time he has worked with Frers, the two are both trained naval architects and made a good connection. “I put my design on the table and Germán made it possible,” says Rover. “He delivered me the volume that I love.”

That volume has enabled all sorts of pleasing little details. In the master cabin, for instance, the space under the bulwarks gives a full-height window on either side. This provides the perfect niche for a small desk, or the alternative option of a fold-down balcony on one side – a rarity in yachts of this size. A mirror above the basins in the owner’s bathroom can be raised at the touch of a button to close off the view of the pool, and there is access through the forward bulkhead to the private foredeck swimming area.

On the lower deck, the forward VIP cabin has skylights as well as hull windows, making it an exceedingly bright space. Lying deep in the bow with a large bathroom and its own dressing room, it is reached up a few steps, which give it the feel of a loft-style hideaway. Here, as in all the cabins, the finish is reassuringly fine, with horizontal leather panels at the bedhead, gloss white cabinetry and dark oak and stainless-steel detailing. Every window has an opening section for natural ventilation.

The first 88 is a five-cabin version, with two further twins and a second VIP cabin further aft. Spread across the whole beam of the yacht, this cabin is insulated from the engine room by the crew quarters, which include a small sitting area. And though the position of bulkheads is fixed, there are many other configurations possible too. “The yard offers the flexibility to turn any cabin into whatever the client dreams of, from gym to cinema or karaoke room to wellness spa,” says Rover. “Even a hammam.”

Tanıl Sürmeli, product manager for Sirena Yachts, insists that this yacht is an evolution of its smaller sisters. “We wanted to keep our brand promises in all our models with big volumes, high efficiency and speed,” he explains. But to me, the new 88 is a big step up for the three-year-old brand in terms of finish, as well as the technical platform behind it. For instance, Sirena has spent a lot of time on the yacht’s insulation and reckons it could “easily achieve” RINA Comfort Class certification. The separation between the guest spaces and the crew areas on the port side also puts it in a different league.

This yacht represents a shot across the bows of other builders in the 30-metre-plus space. “We see the 88 as a step into the superyacht market,” adds Sürmeli, “so we increased our methodology accordingly.” Combine that with the fact that the yard’s new building can accommodate yachts up to 40 metres, and you have a real statement of intent. “We are thinking about doing a family with bigger models that will start around 40 metres,” says Sürmeli. Don’t say we didn’t warn you.

Metis: Inside the 63 Metre Benetti Superyacht

Attila: Inside the 64 Metre Sanlorenzo Superyacht