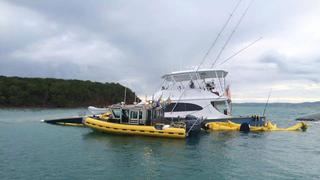 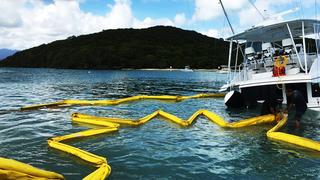 A 22.5 metre sportfish boat, named Afunday, has been rescued from sinking by Sea Tow Puerto Rico. The marine assistance provider arrived to try and prevent any environmental damage and to salvage the vessel.

The fishing boat, built in the United States by Spencer Yachts, hit a reef near Puerto Rico while being delivered from Florida to her owner in Trinidad and Tobago. A quick response by Puerto Rico’s Joint Forces of Rapid Action meant that all three crew members were rescued unhurt.

Afunday hit the rocks off the Eastern side of the island about two nautical miles from the boating hub of Fajardo.

According to reports in the Trinidad and Tobago Guardian the owner, Norman Sabga, ordered the sport fishing boat three years ago. Sabga told press he was relieved to hear that the three crew members, including one of his relatives, were unharmed.

After 2,800 gallons of diesel were removed from the stricken vessel the boat was then towed to safety and lifted from the water. It is unknown at the moment whether any damage was caused to the reef.

There were several reported sinkings last year, with some appearing in our list of biggest yacht disasters. This list included the biggest sinking story of the year, which was reported when shocking pictures were revealed of a 33 metre yacht sinking off Mykonos.