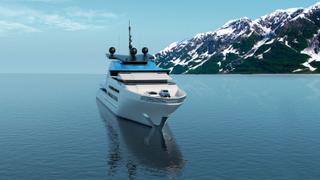 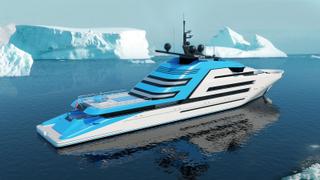 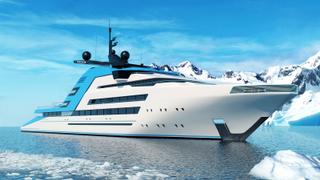 US-based Norweigan designer Kurt Strand has released his latest Strand Craft concept for a 122 metre explorer yacht. The six-storey high Aurora Borealis model will have a 20 metre beam and be transformed into an “open outdoor experience” with a number of tenders and toys.

A large helicopter pad will sit on the aft deck behind a swimming pool with a retractable glass floor. The helicopter hangar will be large enough to accommodate two helicopters while the yacht’s aviation club will be equipped with bars and a launch area as part of the hangar.

In bad weather, the hangar’s large gate can be closed. However, two integrated pantographic doors will still allow access to the deck and pool area.

Meanwhile four fold-out gates for storage and launching a selection of tenders and toys will be positioned on the hull side of the lower deck while a drive-in bay area for a submarine and 13.7 metre tender will sit aft.

The model was inspired by the rough weather conditions of northern Norway and is designed for those who wish to enjoy nature from a luxury environment.

The crew quarters, including cabins and a living area, will sit on the lower deck and accommodate a staff of 48.