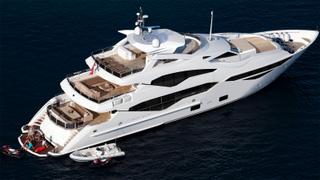 The latest Sunseeker 131 Yacht has been launched in Poole ahead of a planned April delivery, it has been announced.

Built to RINA standards and currently listed for sale with Burgess, Hull 612 hit the water for the first time on February 15. This all-GRP motor yacht measures 40.05 metres overall with a 338GT interior, which can accommodate up to 12 guests in six cabins, while the crew quarters allow for a staff of up to eight people.

Hull 612 differs from other yachts in the Sunseeker 131 series by virtue of having two superyacht spa pools — one situated aft on the sundeck and another on the foredeck. What’s more, the owner’s cabin has been moved to the area normally occupied by the skylounge, where it benefits from direct access to an on board gymnasium.

Further accommodation is split between a main deck VIP suite, as well as two doubles and two twin cabins on the lower deck. The décor has been upgraded as well, with quarter-sawn oak replacing the standard-fit wenge woodwork.

Communal dining is offered on the main deck around a large rectangular table situated amidships, while the open plan saloon is a highly sociable space, with two settees and four armchairs.

Other key features include a hydraulic swim platform that can easily launch a seven metre tender. Power comes from a pair of 3,140hp MTU 12V4000 M93 diesel engines for a top speed of 25 knots and a maximum cruising range of 1,500 nautical miles at ten knots, drawing on a total fuel capacity of 18,700 litres.