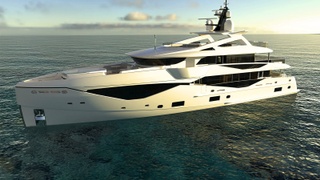 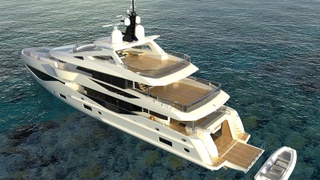 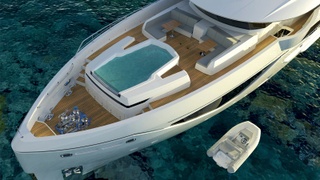 The introduction of the new “radical model” is part of a wider plan that will see the yard double its range to a total of 22 models in the next three years.

Revealed at the Cannes Yachting Festival 2019, the Sunseeker 133 will be the first ever Sunseeker to feature a vertical bow. The yacht will feature a round semi-displacement hull form and will boast 27% more volume than sistership Sunseeker 131.

Speaking at a press conference in Cannes, sales director Sean Robertson said the 131 had been a "successful yacht" for the yard and described the 133 as a "drastic departure in look".

The 448GT interior has been penned by British studio Design Unlimited and has been inspired by “light, space, detail, technology and subtle lighting.” Accommodation meanwhile is for a total of 10 guests in five cabins.

The yacht focuses on increased liveability and comfort on board, with increased versatility and usability of spaces.

Another feature is the innovative configuration of the sky lounge deck. Access to the foredeck is via two parallel side stairwells or through the upper deck which creates a more seamless access and less movement through the interior.

Elsewhere, there is flexibility in the beach club and tender layouts. Either owners can choose to have a traditional garage with plentiful storage for water toys, Jet Skis and other equipment. Alternatively, owners can have a dedicated 9.5 metre full beam beach club at the stern. In this arrangement, the Williams 460 SportJet tender can sit within the foredeck spa pool, which is launched via an adjacent crane.