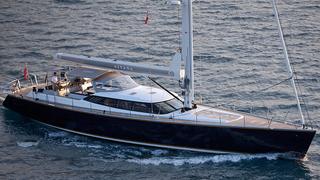 Aiyana was launched in May 2010 at Alia Yachts, Turkey, and she has now been delivered to her owners.

Aiyana is the first hull of the Alia 82LK series designed by Warwick Yacht Design in Auckland, New Zealand. Built in composite, she has a length of 24.68m. She has a 35m carbon mast built by Hall Spars and a draught of 4.1m when the keel is down, which allow her to take part in the most competitive of regattas and perform offshore.

Her layout offers a maximum accommodation of 8 guests and 4 crew thanks to 2 convertible double beds. The master, a double and a twin cabin are in aft position. Forward is another double cabin used by the crew.

Built to the highest standards and with an ingenious layout, the Alia 82LK should become a successful series. Already two other hulls are under construction. Gokhan Celik, founder and owner of the yard, also confirmed to me that several larger projects are in the final stages of development.