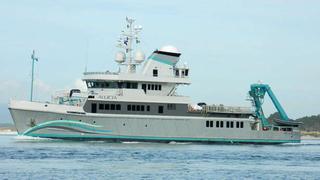 Diverse Projects has announced its successful completion of the refit of 56-metre explorer superyacht Alucia.

Alucia's 12-month long refit – which included a break to allow for a scheduled cruise – was extensive and one of the most complex that Diverse Projects has ever undertaken.

The refit worked to fully upgrade the 40-year-old explorer vessel, which has an interesting history: she was originally built by the Auroux yard in 1974 as a support vessel and launch/recovery platform for diving and submersible operations. After her original usage, she was rebuilt and re-equipped, though with a new sumbersible hangar, and a helipad. Fraser Yachts sold Alucia in May 2011 and reported she was the only yacht in the world at the time to carry three deep-diving manned subs and host a decompression chamber and mixed-gas dive support. With the current refit by Diverse Projects, Alucia received a full maintenance program and upgrade to her submarine and dive control systems.

The refit also included updates so Alucia could retain her commercial SOLAS classification. Part of the challenging refit included the installation of an engine exhaust purification system, supplied by Hugs Engineering of Switzerland, for both of the main engines and the four generators. This endeavour required most of the vessel's internal exhaust system to be reworked.

Diverse Projects has developed its own software system to keep its clients and their management team fully informed on each step of the refit, and this software was utilised in the refit of Alucia. The software tracks job process and costs in real time, and weekly reports are distributed to client's management team with regular conference calls scheduled as well.