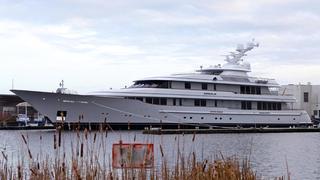 A significant launch took place this weekend when the 67.27 metre motor yacht Drizzle (hull 683) hit the water at the Koninklijke De Vries Scheepsbouw yard in Aalsmeer, the Netherlands.

Drizzle inherits the name of the 55.5 metre Feadship, launched in 2005 as Twizzle, winner of a World Superyacht Award, and now called Issana following a recent sale. The owners decided to build their own yacht Drizzle, using their former yacht's classic design and perfect proportions as a starting point.

The same design team was involved, with De Voogt Naval Architects responsible for her naval architecture and exterior design. The yacht is 12 metres - 20 per cent - longer than her predecessor but proportioned accordingly so that the two yachts look like sisters. Ruud Bakker from Feadship De Voogt Naval Architects commented: 'We also added further refinements in terms of functionality, such as the central staircase that facilitates both guest and crew access to the sun deck. Drizzle contains the very latest systems and technologies, a reflection of how Feadship is consistently moving forward on every level.'

Interior designers Redman Whiteley Dixon also returned to create a contemporary interior based on that of the former Drizzle. The layout accommodates 10 guests in a master suite on the main deck and four further double cabins on the lower deck. The well-designed crew quarters have been finished to a high standard for a maximum of 18. 'This reflects the owner’s concern for crew welfare and a wish that their facilities should be finished to the highest possible standard,' says Drizzle’s captain James Duggan. 'Such attention to detail will be greatly appreciated and respected by the crew.'

Drizzle is powered by twin 1,520kW MTU engines and will start her sea trials soon, with delivery scheduled for the Spring.