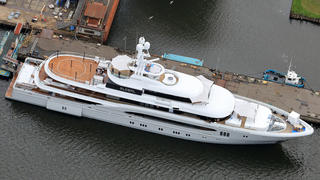 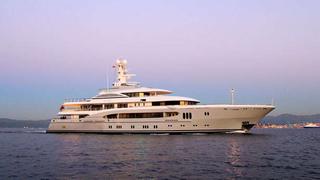 The Lürssen superyacht Global (ex-Kismet) has completed her latest refit, which included extending the aft decks and changing her LOA from 68.15 metres to 74 metres.

This extension moves her 51 places up our definitive list of the Top 200 largest superyachts in the world. The six-month refit at the builder's Rendsburg yard was managed by Hill Robinson.

Delivered in 2007 with a steel hull and aluminium superstructure, this displacement yacht returned to Lürssen for a refit as recently as 2014, after Moran Yacht & Ship sold superyacht Kismet in November 2013.

Now renamed Global, she features exterior design by Espen Øino, which has been updated recently with a new nameplate on the superstructure. Any changes to the original Reymond Langton-designed Art Deco interior are believed to be subtle.

The light grey finish created by the 2014 refit has been retained. Other key features on board Global include a superyacht helipad on the aft upper deck, which was updated and enlarged in 2014 under the consultancy of Nigel Watson, with new lighting and hinged railings.

Global accommodates 12 guests in a master suite, VIP cabin, and four double staterooms that convert to twins, while the crew quarters allow for a total staff of 22. Her four decks and 12.8 metre beam create a total internal volume of 1,795 gross tonnes.

Power comes from a pair of Caterpillar 3512B engines for a maximum output of 3,914hp and a top speed of 16 knots. More importantly, given her name, the 200,000-litre fuel tank gives Global a globe-trotting cruising range of 5,000 nautical miles at 12 knots.