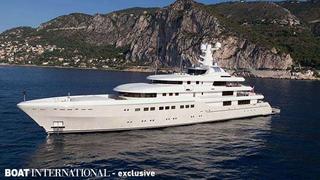 An investigation is underway into an accident on board 82m Abeking & Rasmussen superyacht Kibo that left a crewmember seriously injured and in need of ongoing medical treatment, it was confirmed today by Y.CO, the yacht's management company.

The accident happened at roughly 11.30am on 3 May in Palma, Mallorca, and has left 22-year-old engineer Jacob Nicol brain-damaged, according to comments from his family on a fundraising website. He fell into the water while working outboard of the yacht, Y.CO said in a statement.

As the yacht’s managers we are offering our full support to the crew member’s family, whom I have met with personally.

Nicol was recovered from the water by divers on board Kibo. He was given CPR and transferred to a nearby hospital. Once Nicol's condition was stable, he was repatriated by air ambulance to a leading medical facility in the UK on 13 May, where he continues to receive treatment.

Y.CO said its Emergency Response team was contacted within minutes of Nicol's fall and sent its Director of Yacht Management and Senior Compliance Officer from its headquarters in Monaco to assist on the ground in Palma.

“We are deeply saddened by this incident," said Gary Wright, Co-Founder and Chairman of Y.CO. "As the yacht’s managers we are offering our full support to the crew member’s family, whom I have met with personally.

"Out of respect for all those involved, including the Owner and those crew aboard the vessel, we ask the media and the industry not to draw conclusions or to speculate until the investigation is complete. This incident is a harsh reminder of the dangers that all mariners face daily and why our focus remains on promoting and prioritising safety onboard the vessels we work with.”

Y.CO are also providing support post-incident, working closely with insurers and the yacht's owners, “to coordinate the full coverage of immediate and on going medical expenses to the crew member involved, and financial assistance to enable his family to remain by his side.”

Kibo's captain, 1st officer and 3rd officer have been given an extended period of leave; they will remain on shore until the inquiry is completed.