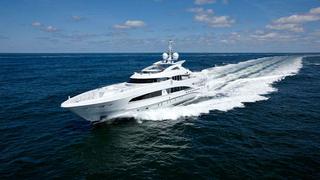 Frank Laupman of Omega Architects is responsible for Monaco Wolf's distinctive exterior lines – her superstructure gives the sense of movement even when at rest. She shares the same naval architecture as previous 50m series Heesen's including Heesen's very zen superyacht Satori (renamed Septimus) and Ventura. Her elegant interior design comes from Francesco Paszkowski.

'From contract signing in early February, to delivery on June 2, in just four short months experienced owner will be enjoying his new yacht! says Rupert Nelson, sales director for Burgess in Monaco, who introduced the owner to the yard. 'This is a fitting testimony to Heesen shipyard's continued commitment to providing pedigree yachts with reduced delivery times that the current market seems addicted to.'

Monaco Wolf is now delivered to her owner with plans to be extensively used this summer in the Mediterranean.