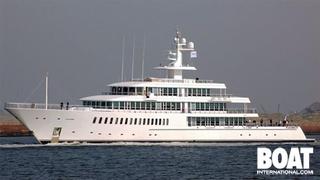 Previously known under the hull number 1002, Musashi left the Dutch city of Harlingen yesterday evening, en route to Gibraltar, to be delivered. With a length of 87.78m, she's the largest Feadship ever built, dethroning the 85.95m Ecstasea launched in 2004.

The name of this Feadship XL-88, a Japanese one, comes from the renowned samurai, Miyamoto Musashi, who is not only revered as the greatest samurai of all time but also as the author of The Book of Five Rings which deals with strategy, tactics, and philosophy that is still studied today. This choice is not a surprise for a yacht owned by Larry Ellison. His yachts invariably bear a Japanese inspired name.

Designed by the duo De Voogt Naval Architects/Sinot Yacht Design, the 87.78 metres of Musashi accommodate a total of 18 guests and a crew of 23. One of the two master suites faces forward on the upper deck, while the second one is aft on the bridge deck. Seven further double guest cabins are on the main deck.

Built in steel and aluminium, she will be capable of excellent performance thanks to twin main MTU engines developing 4,300kW each.

With Musashi delivered, Feadship is now working on three other XL projects.