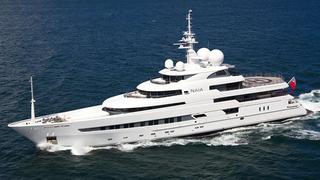 The 74m superyacht Pegaso is refitted at Freire and renamed Naia

Freire Shipyard has completed a three month refit of the 74m luxury research vessel Pegaso, which has also been renamed Naia.

The superyacht, which was sold in February, returned to the Spanish yard where she was launched in 2011 for a range of works. Pegaso was built for an owner who was a passionate diver and the yacht was designed with a five-person VAS submarine and a laboratory for the use of the marine biologists often invited onboard. Freire converted the laboratory into two staff cabins, as well adding facilities in the master bathroom. New Voith thrusters have replaced damaged Van der Velden thrusters and standard dry dock works were also carried out, including antifouling, anodes, propeller and rudder readings. Carpentry was by Metrica, structural piping, cabling and HVAC works by Freire, lighting by Aqualuce and multimedia done by AV&IT.

Naia is a high spec expedition vessel. She features a HCA fully certified helipad of the sort found on North Sea oil platforms, with a platform that extends by 4m to accommodate an EC135 helicopter; air-conditioning can cool the vessel to 21 degrees Celsius when it’s 45 degrees outside; the black water treatment system is so thorough that what comes out complies with the most stringent regulations in the world, making trips to Alaska possible; and four large satellite domes eliminate the risk of a service-disrupting shadow from the mast. These receive internet connectivity from both Ku band for common destinations and C band for remote spots. She accommodates caterpillar owners and 10 guests, plus 28 crew, while 3516C engines, with a total output of 4,700kW, give a range of 10,000 nautical miles at 12 knots.