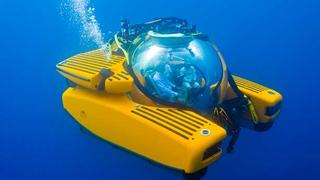 Triton Submarines is poised to begin work on its third 3300/3 submersible for use on a superyacht, having built its first two for the same purpose.

The 3300/3 submarine, the first of which took its maiden dive to more than 3,000 feet off Grand Bahama in December, is so-called because it can dive to 3,300 feet and carries three passengers. It also boasts a transparent pressure hull that is the largest (2.13m in diameter) and thickest (16.5cm) acrylic sphere ever made for a submersible.

‘The sea trials were phenomenal, its performance really exceeded our expectations. It’s the world’s deepest diving three-passenger transparent hull. We’re proud of that and our customers are excited about it,’ says Marc Deppe, vice president of sales and marketing at Triton.

Indeed, the combination of good passenger capacity and panoramic underwater views makes the 3300/3 perfect for superyacht owners who want to explore the world beneath the waves.

The 3300/3 shares its interior layout with Triton’s planned 36000/3, which will be capable of diving to the deepest known point in the ocean, Challenger Deep. The 36000/3 will feature engineering tailored to deep sea pressures, such as batteries that sit in oil rather than air, to maintain better pressure balance with the sea outside, and a pressure hull made of silicon glass rather than acrylic.

‘The 36000/3 is also oriented vertically rather than horizontally to allow it to dive rapidly, because seven miles is a lot of ground to cover,’ says Deppe. ‘It’ll reach full ocean depth in just under two hours.’