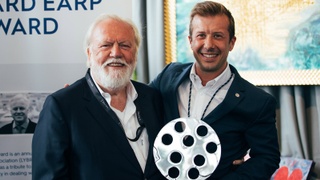 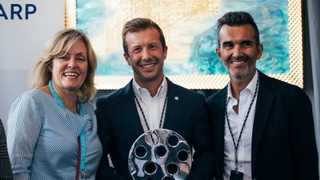 Fraser sales broker Vassilis Fotilas has been announced as the winner of the third annual Richard Earp award.

Founded in 2016 and organised by the MYBA and LYBRA associations, the Richard Earp Award seeks to recognise outstanding work ethic of well-respected industry brokers.

It was established in the name of Fraser broker Richard Earp, who died in 2016 and was renowned for his exemplary conduct and fair negotiations as a broker.

Fotilas was announced as the winner of the award on Wednesday evening, the first day of the 2019 Superyacht Show. He was presented with an award sculpture named Ocean's 9, which was crafted by artist Carol Bruton.

Fotilas was chosen by an independent panel, which included the presidents of both LYBRA and MYBA, as well as last year’s award winner Peter Insull.

Introducing the award, MYBA president Gaye Joyeau-Bourgeois said: “The award was created to honour the memory of Richard Earp, an exceptional and charismatic gentleman who I had the pleasure and honour of knowing since the 80s at the start of my career.

“Richard had a devilish sense of humour and an enviable way of delivering a good story. Professionally, he embodied the values of an outstanding broker.”

“Vassilis has been with Fraser many years, he worked with Richard who was his mentor. He is certainly a gentleman and he is well respected and liked by everyone in the industry.”

Upon winning the award, Fotilas said: “It doesn’t happen very often but I’m speechless and humbled - thank you very much.”