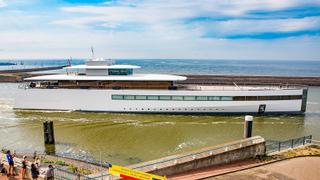 One of the world’s most famous superyachts, 78.2 metre Venus has arrived at Feadship’s Harlingen facility to begin a refit project.

This arrival marks the first time since her launch in 2012 that the Philippe Starck-styled yacht has returned to the Dutch yard, as Venus's 2015 refit took place at Monaco Marine in La Ciotat.

Commissioned by Apple founder Steve Jobs, who passed away before he could take delivery, Venus is a highly secretive yacht with few details made available to the public so far. Accordingly the details of her refit are being kept under lock and key as well.

What we do know is that her hull form was developed by De Voogt Naval Architects and her interior volume totals 1,500GT. Key features include a side-loading tender garage, Jacuzzi and superyacht beach club, while her drivetrain consists of two MTU 16V4000 MTU diesel engines for a total output of 3,422hp.

Venus’s arrival heralds the start of a busy few months for the Feadship refit team, which was recently expanded to incorporate the rented facility in Harlingen.

Other superyacht refit projects underway at the Dutch yard include the 86 metre Ecstasea, which is currently in Makkum getting an owners’ gym added to her helicopter hangar. Meanwhile, the 81 metre Air will have her superstructure repainted in Harlingen as well as adaptations to her superyacht helipad.

Further projects are likely, with the yard adding that it will be launching a new division called Feadship Refit and Services later this year.