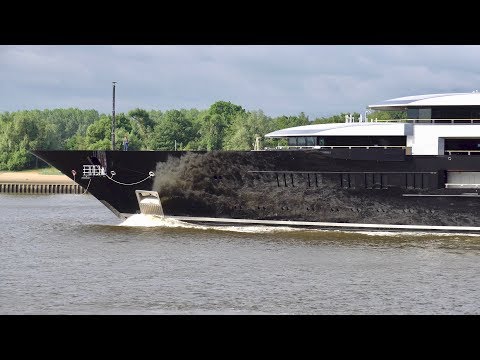 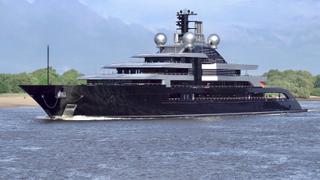 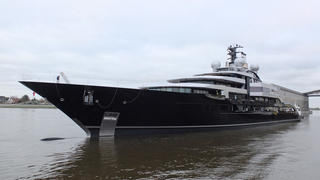 The 135 metre Lürssen superyacht Project Thunder has been filmed cruising under her own power for the first time, following the conclusion of her first set of sea trials.

This highly secretive yacht was first officially reported in the 2017 Global Order Book and she is the largest superyacht to be launched this year. As the video below shows, she features a helicopter hangar built into her enormous superyacht mast.

Lürssen released a short statement upon the April launch of this colossal superyacht, which described her interior as "traditionally styled", although the identity of the interior designer is yet to be revealed.

Details are few and far between at this stage, but it is understood that Project Thunder was built to DNV GL standards from a steel hull and aluminium superstructure.

This full displacement yacht was first photographed at an advanced stage of construction in November 2015, and her masculine exterior lines led many to speculate that she was designed by regular Lürssen collaborator Espen Øino — a fact that has since been confirmed by the yard.

The image below shows that her hull has been fitted with a bulbous bow and finished in a striking black shade, while the five-deck superstructure includes a distinctive wing station amidships, just aft of a three-deck window that should provide spectacular views out to sea.

Scheduled for delivery before the end of 2018, Project Thunder will become one of the top 10 biggest Lürssens of all time, as well as one of the largest superyachts in the world to date. The yard adds that she will cruise mostly in Asian waters.

Other projects currently under development at the German yard include the 123 metre Project Jupiter, which is due for delivery later this year, and the 111 metre Project TIS — scheduled for completion in 2018. The 112 metre Project Palo Alto (2018) and the 139 metre Project Redwood (2019) complete the impressive order book at Lürssen.