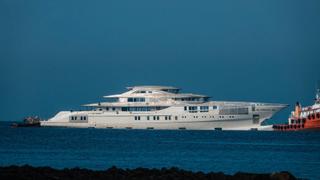 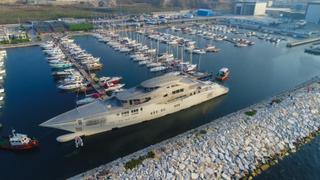 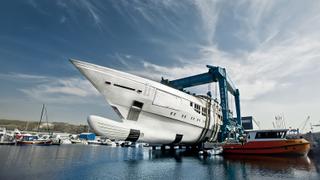 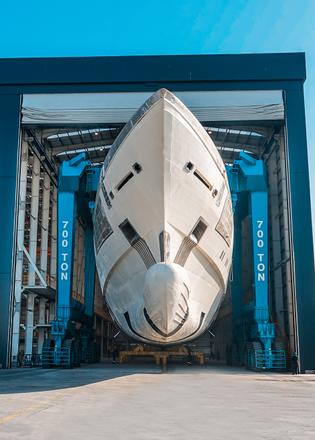 Construction began in March 2016 and the custom yacht will be the largest superyacht completed in Turkey when delivered in late 2019. The drone footage below shows the yacht in greater detail than ever before and gives a sense of scale to this monumental project:

Speaking at her technical launch back in November, yard CEO İsmail Şengün said: "Today is another proud day for our company. We are happy to see how beautiful the boat is and really look forward to presenting her to the world in a couple of years.”

The third order from a repeat client from India, the deal to build the Bilgin 263 was signed in October 2015 at the family-run builder’s head office in Istanbul.

The exterior design and naval architecture for the Bilgin 263 was created by the Antalya, Turkey based Unique Yacht Design, while the engineering comes from London-based H2 Yacht Design. Accommodation is for up to 16 guests split between eight staterooms, including a master suite, three VIPs and four double cabins. Meanwhile, the crew quarters allows for a staff of up to 24 people.

The Bilgin 263 has a slim, sleek exterior profile with multiple outdoor entertaining areas, such as a huge foredeck lounge with dining area and settees. Another lounge forward of the pilothouse boasts a superyacht spa pool, offering privacy while at port and great views from this lofty perch.

The new 80 metre yacht is the first of two such hulls being developed at the Turkish yard, with the second Bilgin 263 due to be given a technical launch in spring 2018.