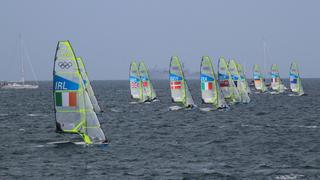 Video: US Olympic sailing team practice ahead of Rio 2016

Up close footage shows the US Olympic sailing team inches from the water as they practice in their 49er sailing dinghy off the coast of Miami.

Crews are training hard as we enter the Olympic year, with some 380 athletes from around the world preparing for the 2016 Summer Olympics in Rio de Janeiro. The sailing is due to take place at Marina de Glória in Guanabara Bay from August 5-21.

Fred Strammer and Zach Brown will compete in the 49er, just one of the 10 classes that will race in the Olympic regatta. Time on the water is crucial, as one small mistake in a boat like this can end your chances of a good result.

The high performance skiff-type 49er is the fastest two person monohull dinghy and can reach speeds of up to 24 knots. The smaller rigged 49er FX is one of the four women’s classes.

Just as with the America’s Cup, one of the best ways to view the racing is from on board a superyacht. Plans are in place to help anyone who wants to visit Rio de Janeiro on a superyacht for the Olympics, with Brazil Yacht Services putting together an overview of the best places to berth.

Marina de Glória will be closed to foreign yachts but visitors will be able to anchor in Guanabara Bay. There are also other marina’s that provide other options to make sure owners and guests can stay close to the action.

Superyachts are a common sight at some of the worlds top sporting events. Formula One draws in superyachts to many of the races by the coast while in 2014 Leonardo di Caprio chartered 147 metre Topaz as he enjoyed the World Cup in Brazil.

Visit Rio de Janeiro on a superyacht for the Olympics

Video: the America’s Cup teams practice for the World Series in Bermuda