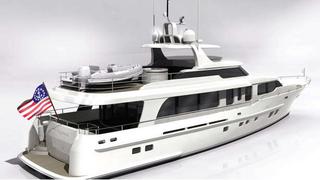 Evolution of the raised pilothouse

Designer Luiz de Basto usually shutters his Miami office for a holiday between Christmas and the New Year. Last year was no exception, but instead of traveling, he decided to take advantage of the quiet to sit at his desk and do some fanciful meditation about boats. Among the mindscapes he explored and sketched was the future of the raised pilothouse motor yacht.

‘What will be the raised pilothouse of the next decade?’ he wondered. ‘What can we do with it to excite the market?’

A creative designer engaged in free-form thinking, mindful of parameters but unbound by the specific demands of a client or a yard, can be a formidable force for change. Among the ideas that de Basto pondered was a raised pilothouse with a glass ceiling or even open with a retractable ceiling like a convertible car.

None of his ruminations may see the water, but de Basto is bullish on the concept. In any case, there is evidence the market is primed for new directions with this genre.

‘We haven’t seen much new stuff come out on this type of boat lately,’ he says, ‘but the concept is hardly exhausted. We can do much more with it.’

The raised pilothouse configuration has been around for more than 50 years and is the predominant arrangement for motor yachts between 24m and 37m feet. It essentially places the wheelhouse a half deck above the main, and typically has access a few steps higher to a flybridge and sun deck. In some cases, the wheelhouse is just a wheelhouse, but most are equipped with settees where once upon a time there was a pilot berth.

While it reduces some guest space on the main deck, a raised pilothouse’s main benefits are that it offers good visibility from the helm and opens up space on the main deck forward for a stateroom, crew quarters or a popular ‘country kitchen’ galley, often with windows and a forward view. Refinements to the concept are creating more space and new options for owners that are making them feel more like larger yachts.

No one can say with certainty which designer produced the first raised pilothouse (RPH) boat, but it is clear the type evolved from both the cruiser style and flush deck style yachts that were in fashion well into the 1950s. Both designs typically had an engine room that was well forward of amidships. As speed requirements increased, engines became larger and both hull forms and engine placement changes aft ensued to deliver semi-displacement speed. A melding of the two styles to accommodate these changes led to what we recognize as the raised pilothouse configuration.