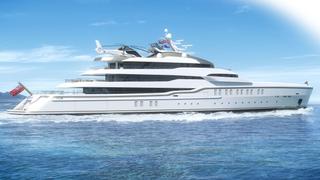 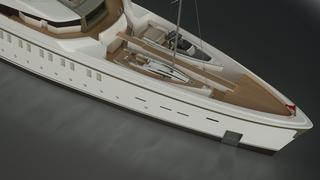 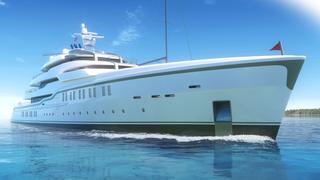 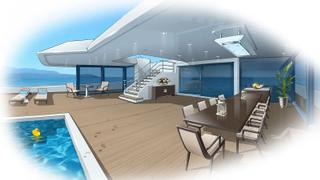 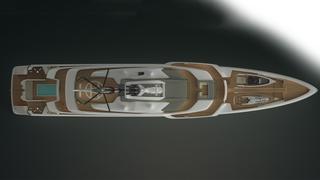 First announced back in November, the 86 metre collaboration between CRN and Harrison Eidsgaard was one of the most exciting new designs to emerge last year.

The London-based studio’s first design for the Ancona shipyard, this muscular yet elegant explorer blends expedition yacht capability with sleek superyacht styling. After two years in development, this exciting project can now be revealed in more detail.

Speaking exclusively to Boat International, designer Ben Harrison explained: “Health and fitness have become much more part of our lives and that’s reflected in the desire for more of an explorer type vessel. There is more of an appetite for cruising to higher latitudes and maximising what you can do — whether that’s heliskiing, diving in a submersible or riding quad bikes.”

With this in mind, the side-loading tender garage was always going to be one of the key aspects of the design, but that is only half of the storage on board, as the studio also worked in a large foredeck locker as well — big enough to store a pair of 12 metre tenders and equipped with a crane capable of lifting up to 45 tonnes.

Harrison Eidsgaard was keen to demonstrate that all this practicality needn’t come at the expense of aesthetics. For this reason the tenders don’t impinge on the profile of the yacht and the wing decks are cleverly integrated into the flowing lines.

“We want all of our exteriors to have a sense of momentum, like an athlete in the starting blocks.” Harrison continues. “It should feel like the boat wants to move forward, it has a sense of purpose.”

No 86 metre superyacht would be complete without a swimming pool and the studio experimented with a number of options before settling on the traditional aft deck arrangement that is seen here.

An upper deck pool version has also been developed, while Harrison is keen to incorporate an indoor pool, something he describes as “fantastic if you were travelling to high latitudes”.

Moving inside and the design includes room for up to ten guest cabins and a crew of 24. The owner's suite and superyacht wheelhouse are interchangeable, so there is a choice between sleeping on the main deck or the bridge deck, but in rough seas Harrison believes that the owners are more likely to head down to the full-beam VIP suite, which is situated amidships for maximum comfort. “It’s about offering as much flexibility as possible,” he adds.

Harrison Eidsgaard has created a preliminary interior décor, described as “relaxed and youthful”, but there is plenty of scope to work with another designer if the client wishes.

Topping off the design, quite literally, is the superyacht helipad, which is intended for touch-and-go operations with an EC135. Harrison Eidsgaard has plenty of experience in this area, having working with Airbus to redesign its Eurobus range.

“Having a helipad gives a lot of options in terms of exploration,” enthuses Harrison, before adding: “Most of the younger tech billionaire guys just aren’t interested in sitting in the Med.”