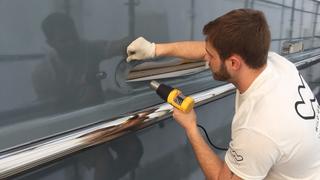 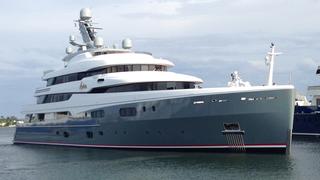 How vinyl wraps are being used to style superyachts

Strange things are afoot outside my local motor factories. The car park is full of boy-racer specials, with loud exhausts and matt-black paint jobs. It’s all the rage in high-end vehicles, after all. But these budget-conscious modders have a new way of applying tricky paint schemes to their pride-and-joys – they’ve taken to wrapping.

Vinyl wraps have been around for a while. In fact, for yachts and, in particular, smaller racing sailing yachts, it’s common to cover your gelcoat with a colour dujour – perhaps to plaster sponsors’ logos over the hull, or to get the yacht to match your Porsche’s metallic blue. But this small-boat practice is creeping up the ladder.

The Wild Group has been wrapping boats since 1995 but a couple of recent projects have put superyacht wrapping on the map. There’s the hull of the 50m Double Trouble, for example, or the superstructure of the 55.4m Turquoise. But in early 2015 the Wild Group completed its largest project to date: wrapping the hull of the 68m motor yacht Aviva.

“Wrapping superyachts has become more prevalent in the last three years,” says Martin Bartos, the Wild Group’s project manager for France. “Wrapping boats is similar to cars, and when you compare it with the equivalent paint job, it’s much quicker and cheaper.”

So what is this mysterious vinyl wrap? Essentially, it’s a coloured layer of plastic or foil film with a special glue layer underneath. The underside comprises a series of small tunnels, which stop air getting trapped, thus negating the frustration of trapped air bubbles – something that anyone who has tried to put a protective film over their smartphone screen will have experienced.

There’s more to a wrap than just gluing on a sheet of coloured film, though. “With a traditional paint job, it’s very difficult to apply matt colours, colours with sparkle effects or metallic colours,” Bartos continues. “You don’t have that problem with wrapping. You can also have special finish effects like brushed aluminium, titanium gold or chrome.”

Making a custom colour is also possible, although it means ordering a minimum batch of wrap of 1,000m in length. As a yacht such as Aviva takes about 800 metres of wrap to finish the hull, the wastage would be surprisingly small.

Of course, such rolls mean there will be joins. There are two options: a 5mm overlap for each strip, or a butt joint that appears seamless but carries the risk of the joint spreading down the line. But even with the overlap joint, says Bartos, it’s unnoticeable from a few metres away.

Maintenance, too, is easy. The vinyl can be washed using soapy water and a sponge, making light work of those dreaded hull wash downs.

Such is the potential of the wrap, some companies are even offering it as an option from the get-go. Monaco yacht builder Dynamiq offers a variety of Wild Group wraps as standard options on its new 38.6m D4 range, as seen on Jetsetter.

With metallic wraps offering a typical lifespan of about three years, and more conventional colours coming in at five to eight years, the question, of course, is what happens when you decide hot metallic pink is no longer the colour for you. Fortunately, the answer is straightforward. “The glue is such that when you strip it off after five years, it’s clean and clear – there’s no effect on the finish underneath,” Bartos explains. “The original paint will be like new.”