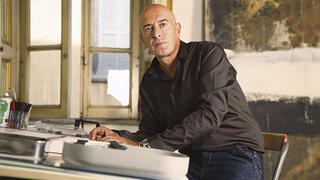 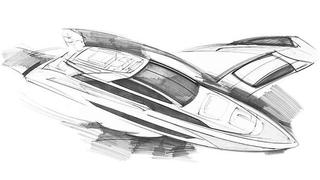 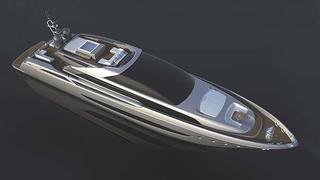 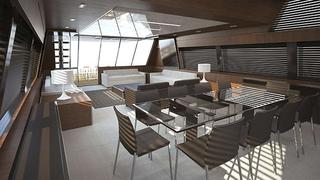 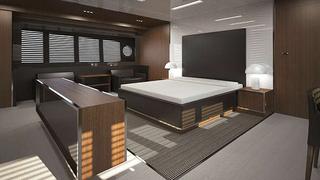 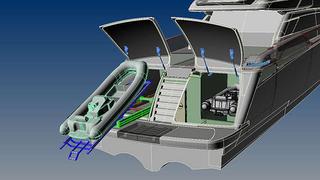 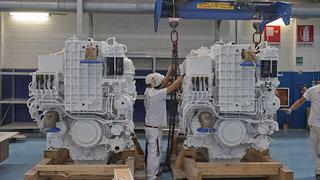 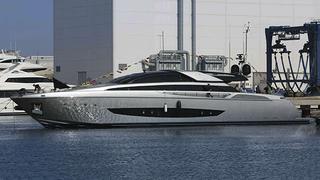 It is common to talk about passion when it comes to yacht design – in fact, it is often used to the point of cliché. Yet spending just a couple of hours with Mauro Micheli, head designer at Italian company Officina Italiana Design (OID), the team behind Riva’s new 37m flagship superyacht the Riva Mythos 122, is enough to reaffirm that genuine passion not only exists in our industry, but can be imparted in buckets to anyone who strays close enough to take notice.

I sit in the studio’s magnificent buildings in the town of Bergamo, and as I talk with Micheli, OID’s CEO Sergio Beretta and other members of the studio’s team, the air buzzes with the excitement and passion of a company in total harmony with its projects.

Micheli idly scribbles on a piece of paper as we speak, and a simple yet beautiful, isometric view of a small motor boat on the plane develops before my eyes. It should come as no surprise really – Micheli harboured ambitions of becoming an artist before an opportunity to join the technical team at Riva presented itself some 30 years ago.

‘I won a contest because Riva was looking for an assistant in the technical department,’ he says. ‘I was studying art. There were 200 people in the contest and I won. I thought, “Riva’s a big brand, it’s near home and maybe it’s an opportunity,” so I left my art studies and started in Riva’s technical office. I was not really interested in the boat industry at the time. It was not too difficult because I was assistant to the main architect there and we were maybe a little separated from the rest of the technical team. It took me a year to get into the job and to realise that it could be my direction and life.’

It was in 1994 that Micheli and friend Sergio Beretta set up Officina Italiana Design, boosted by a contract from the yard to design and develop Riva’s boats. A series of iconic models followed, including the Aquariva 33 and the Rivarama 44, the Duchessa 92 and the Domino 86. It is from this heritage that a new model is emerging, set as Riva’s new flagship and coming in at 37 metres: the Mythos 122.

I spent the day before touring the yacht in build. It is an impressive departure for the marque, not least because it is Riva’s first aluminium boat – and this in turn has led to a collaboration with CRN, big boat specialists and sister to Riva under the Ferretti Group umbrella. Even so, moving to a new material when you are known for your GRP yachts is an interesting decision. ‘First of all,’ explains Antonio Campagnuolo, product management officer for the Ferretti Group, ‘aluminium allows us to offer many interior layout options for three-, four- and five-cabin versions along with other changes. If you build in GRP you cannot offer all these solutions. Secondly, we decided to move Riva to a different level – this is the first step to bigger Rivas and we want to extend the range at the top end.’

This change in material has of course brought challenges. ‘It’s our first aluminium boat,’ Campagnuolo continues, ‘so we have dedicated particular attention to controlling the weight – we have scales that measure every single part we put on board to ensure the final weight will be totally compliant with the project. We started with a minimum target speed of 27.5 knots.’

‘This type of boat is very important both for Riva and for CRN,’ explains Luca Squassoni, product manager at Riva. ‘For CRN this is more or less the first fast yacht built in light alloy.’

Key to the build side is the fact that Riva can draw on the expertise of the team at CRN, and in particular the workforce at CRN who are used to building with these materials. ‘The attention to weight and the detailing for quality are all new activities developed with the team at CRN,’ says Squassoni.

‘This is a project where all the design is completely integrated between Riva and CRN,’ Campagnuolo adds. ‘For the execution we have a dedicated team from CRN but with constant, day-to-day support of the Riva team – the people who every day when the sun comes up start to think Riva, and whose dreams at night are Riva again!’

The Riva/CRN partnership is not entirely new: in 1970 Carlo Riva had teamed up with CRN to build six 23.5 metre yachts, two 27 metres and one 30 metre over an eight-year period. And the historical connection extends to the design side: Micheli has, after all, been designing Rivas for nigh on 30 years.

‘In fact,’ Beretta smiles, ‘we’re a bit like the historical memory of the shipyard. Riva has the DNA to do something different, to lead the market. Even the big boats like the Mythos project we see as big toys – you have to enjoy them, you have to dream when you buy a boat. There is an emotional part that is very important. The Mythos 122,’ Beretta continues, ‘is the evolution of the Domino 86. It keeps the family feel of the Domino with more space and more comfort.’

That space has translated into what will be a comfortable and impressive yacht, with a large main deck diner/saloon, an impressive wheelhouse area under sleek, sloping windscreen elements, a generous and versatile sundeck, and between three and five cabins in various configurations on the lower deck. The owner of the first Mythos – who is moving up from a Domino 86 – has opted for a large full-beam midship master suite covering close to 40 square metres complete with 2.24 metre headroom and just two further, VIP-size guest cabins. He has also specified his own sundeck layout including a spa pool and a bar.

The interior spaces, in spite of the sleek exterior lines, are still impressive. The saloon is over nine metres long – competitive for this size bracket – while materials used include four key cues: white lacquered surfaces, brown leather, polished stainless steel and black walnut. Guest bathrooms feature Corian finishes (a stone-hard blend minerals and acrylics), while the master en suite uses Laminam (a super-thin porcelain slab). The owner of the first Mythos has also had a hand in the galley design, as food and cooking is a particular passion. The space includes a small breakfast table in the corner, designed so that the owner can enjoy spending time here.

The deck spaces are also impressive, with a comfortable aft deck, decent swim platform, and an inviting foredeck seating area with sunpads over a large foredeck locker that can be used either as a large bosun’s locker or as stowage for an additional tender/jet ski. Just inside from the starboard guest entrance is a dayhead that also features a full shower – perfect for a rinse following a sunning session on the foredeck. The main garage aft is actually divided in two, with one compartment on either side of the centreline served by its own transom door. An electro-hydraulic launch system ensures easy deployment and recovery of the tenders and toys.

The engine room benefits from the CRN input and is a well thought-through space. ‘She’s not a big boat,’ enthuses CRN project manager Nicola Englesos. ‘She’s a small ship.’

The engine package on the first hull comprises twin MTU V12 4000 M93 units to push the yacht to a designed top speed of 27.5 knots. At a cruise speed of 25 knots range is projected to be 400 nautical miles from the 18,5000 litres of fuel, with a long-range cruise speed of 11 knots giving a range of 1,000 miles. The engineering department has gone to great lengths to study the vibration, thermal and acoustic properties of the yacht to ensure that proper insulation is added.

It is, perhaps, the view from afar that is the most striking, though. The lines of the Mythos 122 – which are coupled to naval architecture from the Ferretti Group’s own in-house team – are lithe and rakish, although care has been taken to create a design that is more timeless than challenging – and her sleek profile is emphasised by use of a new Regal Silver paint colour offset by metallic black, with a varnished black coachroof also extending the black windscreen to the forward part of the sundeck. It is this approach to the overall look that is particularly important to Micheli and the designers at OID.

‘There are other designers,’ concludes Micheli, ‘who start from the interior, and the lines are a compromise of what they want inside. We approach a project thinking that an object must be harmonious in itself from the outside, then we find the spaces for what we need. We always believe our boats must be like sculpture.’

Micheli gives a final flourish and his sketch is finished. It is a demonstration of natural artistic talent, combined with evident passion, which has translated beautifully into the new Riva flagship.