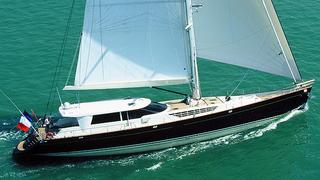 Eric Trupheme at Ocean Independence tells me that the postponed Open Day aboard the 34.2m sailing yacht Obsession II will now take place in Mallorca’s Porto Adriano on June 19th between 12pm and 4pm.

To recap: Obsession II is jointly listed for sale with Manfred Haas at Haas International. Built by France’s C.I.M. Shipyard to a design by Berret/Racoupeau in 2002, this superyacht is Bureau Veritas classed and her 34 square metre saloon offers panoramic ocean views.

Last refitted in 2008, she accommodates up to eight guests in four sumptuous staterooms: a master, three doubles and a twin plus two cabins for three crew.