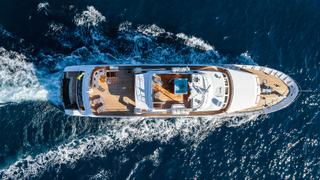 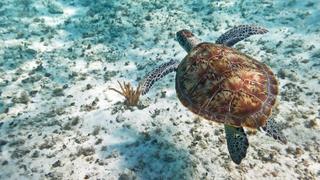 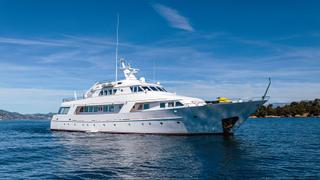 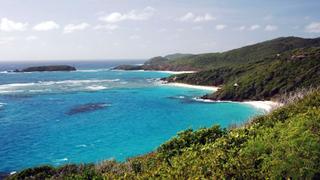 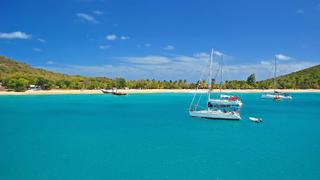 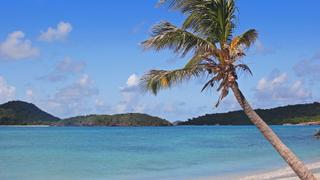 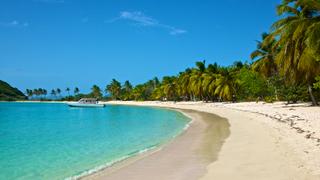 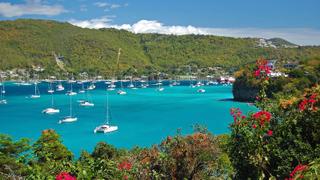 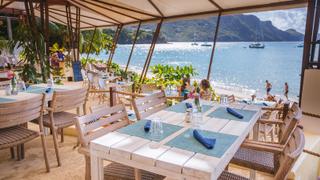 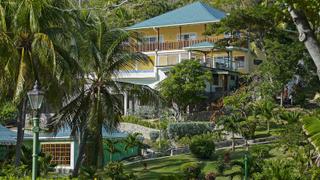 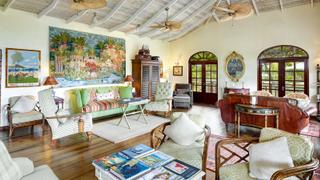 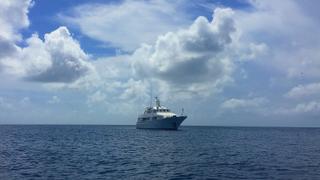 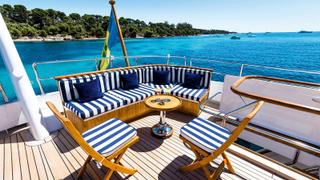 Best of both: Discovering the Caribbean on board the Bequia Beach Hotel's classic Benetti

Are luxury hotels and superyachts a match made in heaven? Sophia Wilson discovers why one Caribbean hotelier has added a classic Benetti to his menu

The bright turquoise water laps at my paddleboard as giant green turtles float serenely beneath me, apparently unaware of my presence. This remote spot in the Tobago Cays is almost clichéd in its beauty: a deserted island with a pristine stretch of white sand lies to my left, while a handful of catamarans bob gently in the calm waters behind me.

The only small negative in the middle of this paradise is that I am a less than proficient paddleboarder and, despite channelling my inner Brigitte Bardot, I am more reminiscent of Bridget Jones floundering on top of the water.

I am fortunate enough to be exploring this stunning part of the island chain of the Grenadines on board 34 metre Star of the Sea. The experience is part of a new venture by the yacht’s Swedish owner Bengt Mortstedt to allow guests to combine a stay at his Bequia Beach Hotel with a trip on board the beautifully maintained classic Benetti.

“From the hotel’s perspective, it gives guests the chance to experience a taste of the superyacht lifestyle,” says Mortstedt, who has recently moved the yacht across from the Mediterranean. “I also thought it would be a good opportunity to promote the yacht because we are the only superyacht that is based here in the Grenadines.” The new three day trip, combined with a hotel visit, allows guests to take in Mustique, the well-known Royal holiday destination, the Tobago Cays Marine Park and Union Island, as well as saving plenty of time to explore Bequia.

Less than an hour’s cruise from the old-school charm of Bequia, Mustique feels like a different planet, with its sprawling mansions and almost unnerving neatness. The island’s reputation as a place where royals and celebrities can lose their inhibitions (and frequently their clothes) was started by its owner Colin Tennant, the 3rd Baron Glenconner, more than 50 years ago. The flamboyant British aristocrat purchased the island in 1959 and transformed it from a mosquito ridden wasteland to today’s millionaire’s playground.

Gifting a piece of land to Princess Margaret as her wedding present, he built her a colonial villa, Les Jolies Eaux, which latterly became her refuge during times of turmoil. More than two centuries of lavish fancy dress parties followed but financial woes eventually led to Tennant being forced to sell his stake and, in 1992, he moved to St Lucia with his pet elephant Bupa.

Despite Tennant’s controversial departure the island has continued to thrive under the management of the Mustique Company – it is where the Duke and Duchess of Cambridge “babymooned” in 2013 before the birth of Prince George, and celebrity residents vary from entertainment giants such as Celine Dion and Shania Twain to business moguls including Peter Lynch and Tommy Hilfiger.

We drop anchor on the west side of the island, where the legendary Basil’s Bar – famous for its dangerous combination of rum punch, sailors and supermodels – has recently been flattened. Fortunately, a pop-up version has been installed next door and we are assured that a bigger, better Basil’s will be reopening this autumn. We are given a guided tour of Mustique by local driver Boom Boom, who has been on the island since the days of Tennant and Princess Margaret. While secrecy may be the selling point of Mustique, discretion is perhaps not Boom Boom’s strongest personality trait and he reliably informs us of “secrets”, including the date of Prince George’s conception.

Hiding at the end of perfectly manicured drives, the island’s sprawling mansions offer owners a chance to escape from their public lives. Select visitors can also access this exclusive lifestyle through the Villa Collection. For example, Princess Margaret’s prestigious property is available for $34,000 a week during high season, or Tommy Hilfiger’s grand Palladian-style residence, next door to Mick Jagger’s, is available for up to $85,000.

As we continue down the chain of stunning islands, we pass the vibrant green hills of Canouan. Famous for its stunning oceanside championship golf course, the island has a new superyacht marina, with capacity for yachts up to 100 metres, under construction and due to open later this year.

While the extra facilities will undoubtedly be welcomed in the region, as we arrive at our anchorage for the night in Tobago Cays Marine Park, with calm, crystal clear waters teeming with green turtles, coral reefs and five uninhabited white sand fringed islands to be explored, it is hard to imagine wanting to be in the confines of a marina.

The authentic Caribbean experience continues as the sun sets and we head by tender to the nearby island of Petit Bateau. Here, on a deserted beach, are a number of brightly coloured picnic trestle tables, and the pleasant smell of a charcoal barbecue wafts through the air – the perfect picnic spot. The enterprise is run by locals from nearby Union Island who catch fresh lobster to prepare for passing yachts. There may be no white tablecloths or silver candlesticks but we are served perfectly cooked lobster smothered in local herbs and butter, which we wash down with a rum punch that would make even the hardiest sea dog’s hairs stand on end.

The next morning, after a quick dip in nearby Salt Whistle Bay, home to an eclectic mix of small shops and Captain Jack Harrow (who bears more than a passing resemblance to a certain raggedy character from the Pirates of the Caribbean), we make the three hour cruise back to Bequia. Returning to dry land might seem like a comedown after life at sea, but the green hills and white sandy beaches of Bequia are an enticing alternative.

We drop anchor in Admiralty Bay, one of the most protected harbours in the Caribbean thanks to the steep verdant hills that cuddle the basin of brilliant blue water. Taking the tender in to Port Elizabeth, Bequia’s buzzing capital village, we find an array of colourful houses, traditional wooden fishing boats and a selection of roaming wildlife including chickens, dogs and goats.

A controversial aspect of life on Bequia is that it is one of the few places in the world where whale hunting is still legal. It is seen as part of Bequia’s cultural tradition and whales continue to be killed in traditional Moby Dick style, using hand-thrown harpoons. The activity is restricted to no more than four times a year, a quota seldom reached, and a kill is cause for a huge festival style celebration on the island.

From Port Elizabeth a seaside path known as the Broadway stretches along the shore and is lined with small bars and restaurants. These include the Whaleboner, which, as its name suggests, uses whale bones as part of the décor, and Tommy’s, which serves great lobster pizza. At the far end of the Broadway, hiding behind a jutting cliff, lies Princess Margaret Beach (apparently she once swam there). The ivory coloured beach, with its quietly lapping turquoise waves, is where another of Mortstedt’s business ventures, Jack’s Beach Bar, is situated. Effortlessly chic and with a killer cocktail menu – don’t miss the Mango Mai Tai or its SVG & Tonic with pressed ginger and grapefruit – it’s the perfect venue to while away a long afternoon on the island.

Less than five minutes away by taxi – though be aware that taxis come in the form of open back pick-up trucks – lies Friendship Bay, home to the colonial styled Bequia Beach Hotel. Set in nine acres of lush tropical gardens, it is the only privately owned and managed hotel to have been built in the West Indies for more than 10 years and is filled with unique touches, from vintage suitcases to a reception desk styled from half a hot air balloon basket. Perched at the top of the property is the Estate Villa, with a private infinity pool and wraparound terrace overlooking the resort’s own glorious stretch of sand. Complete with butler service and a private maid, it’s a perfect land based hideaway.

The resort is home to two restaurants – Italian style Blue Tropic and Bagatelle, which offers a unique world blend of Caribbean and Scandinavian flavours. Panic not – there is no jerk herring on the menu – but Mortstedt has deliberately capitalised on the growing culinary reputation of his home country, inviting different chefs out each winter season to adapt and enhance the menu. The executive chef this year has previously worked at the two Michelin starred restaurant Noma in Copenhagen and highlights of the menu included tuna tartare served with a dill cream, and open ravioli with spiced chicken.

After dedicating nearly two decades to the island it is no surprise that Mortstedt is proud of its natural charm and new developments. He has invested in a twin propeller plane for guests to enjoy private transfers from Barbados to Bequia and is in the process of building a jetty that will accommodate four yachts up to 50 metres. “There will never be a mass market for Bequia because it is difficult to get to,” he says. “Purely the cost of getting people here will always mean that it remains exclusive.”

However, he hopes that the introduction of Star of the Sea might help persuade more people to make the journey. “You have to create the destination. You have to give people a reason to want to come here,” he adds. “I think the yacht is a great addition as it opens up the whole area.” Having had a glimpse of this secluded part of the Caribbean I am inclined to agree. Bequia and the surrounding islands are a well-kept secret best explored by both land and sea.

Bequia Beach Hotel: Prices from £6,999 per person based on 2 adults sharing a 4 bedroom Estate Villa for 7 nights including daily breakfast, return Club Class flights with BA and inter-island flight and transfers. Price based on travel: 01 Dec 2017.

Spice up your life: Why Grenada is a recipe for superyacht success

STAR OF THE SEA