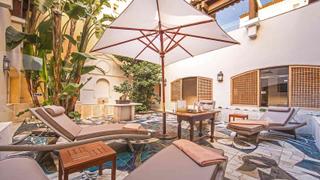 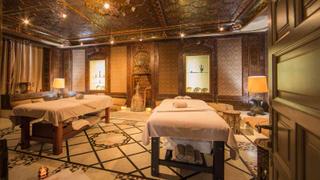 The superyacht mecca of the French Riviera, St Tropez abounds in high-end hotels and exclusive watering holes. Accessible via the most fashionable boutiques of Place des Lices and overlooked by the citadel, the iconic hotel Byblos is just as much a draw for the elite as its spa by Sisley Cosmetics.

Built by Lebanese hotelier Jean-Prosper Gay-Para in an attempt to charm Brigitte Bardot (who missed the opening as she was on her honeymoon), the citrus-hued Byblos has been Saint-Tropez’s chief celebrity hotspot for five decades. Mick Jagger (who married Bianca here in 1971), Naomi Campbell and Rihanna have all sipped cocktails by its pool and partied at its flamboyant, rainbow-lit nightclub, Les Caves du Roy.

Fortunately, the hangover requirements of the most demanding divas can be taken care of in its hippy-chic spa by Sisley. Nothing beats puffy eyes and a tired complexion like a good facial, and there are 10 on the menu. For immediate results the spa’s Radiance Treatment harnesses the power of ginseng to leave your face looking less tired and your skin glowing. For the full VIP affair book the Middle Eastern inspired private suite with its own hammam, decorated with stones from Jerusalem. And, afterwards unwind in the spa’s mosaic-floored courtyard or in the Salon Libanais, which was imported stone by stone from a 16th-century palace in Beirut.

It’s just a 10-minute stroll from the Port de Saint-Tropez– or a three-minute chauffeur ride if you are in stilettos.