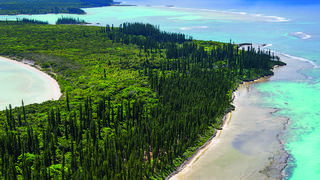 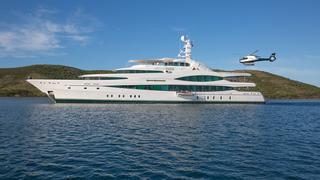 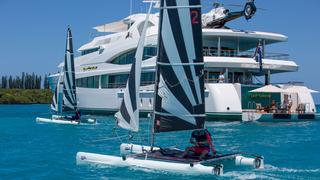 Here’s a challenge. With a world map by your side, ask any of your friends to put their finger on New Caledonia. For most it will be a struggle and they will probably hover around Scotland or Canada. Some clues: New Caledonia is a French dependency, the main island is 250 miles long and 30 miles wide, with mountainous terrain and red soil rich with nickel ore, the source of its wealth. Give up? It is in the Coral Sea about 750 miles off the coast of Queensland, Australia, half way to Fiji and close enough to the trans-Pacific cruising route to be of interest to yachtsmen, especially those heading for Australia. And it has plenty to tempt an owner off course.

Inland, the mountainous, forested terrain of New Caledonia offers jaw-dropping walks, but it is the coast that we explore as guests of Lord Irvine Laidlaw aboard his 68 metre Feadship, Lady Christine. New Caledonia holds a greater area of sheltered water than any other Pacific island, making it perfect for watersports among the sandy islands that lie within the calm waters of its lagoon.

From New Caledonia’s capital, Nouméa, luxury yacht Lady Christine sets out for Amédée Island, within the lagoon’s south eastern reaches. Tourists are shipped here by the boatload and peak times should be avoided, but the 56 metre lighthouse that dominates this sandy islet is well worth a visit during a superyacht charter, both for its historic value and its views. Built in Paris in 1862, the cast iron “flat pack” was erected on Amédée – a triumph of French 19th century engineering.

The tentacles of an unseasonal typhoon to the north threaten wind and rain, so we head west between Ouen island and the mainland to seek overnight shelter at Prony Bay. Rain falls in a deluge, discouraging a visit to the ruins of a French penal settlement, while muddy run-off from the land also prohibits a dive on the Prony Needle, a pinnacle built up almost to the surface by hot mineral springs. In good weather, the pilot assures us, this is a magical anchorage.

The next day we aim for New Caledonia's Île des Pins, 40 miles to the south west, where better weather is promised. Four hours later we drop anchor in Kuta Bay, with its hills dotted with tall Araucaria trees (mistakenly identified as pines by the early European explorers who named the island). This idyllic bay is home for three days we spend cycling, racing the superyacht's Dart catamarans and overflying the coastline and off-lying islands in the yacht’s EC130 helicopter, the sandy cays and beaches like bright jewels in a sea of brilliant turquoise. The island, served by a small airstrip, has superb hotels such as Le Méridien, where a superyacht charter could begin or end.

The north-facing coastline of mainland New Caledonia is open to the trade winds and dominated by small ports that export dusty nickel ore, while the water between the reef and shoreline is quite narrow. So our next stopover is the southern lagoon, where a luxury yacht of Lady Christine’s size can travel north westwards for 60 nautical miles in sheltered, emerald and turquoise water. The south lagoon is a great area for family watersports, with fishing spots, safe places to deploy toys, and a choice of islands for drinks or beach barbecues.

New Caledonia’s inland attractions are easily reached from this coast. From the Château Royal Beach Resort hotel, at the southern tip of Nouméa in Vata Bay, local guide and botanist François Tran takes us on a day trip to the Blue River National Park. We explore an inundated forest and meet a rare cagou bird – the national bird of New Caledonia – with its camouflage of black-striped grey plumage. Another excellent guide, Axelle Boullet, shows us the jungle trails of the Ferns Park and the mother of all flowering plants, the Amborella Trichopoda – classified as a living fossil and endemic to New Caledonia.

Without doubt, for those on a trans-Pacific luxury yacht charter, New Caledonia is a gem that blends Pacific beauty with French luxury. Those who stop off to sample its uncrowded waters will be thankful that most yachtsmen still think it’s somewhere near Canada.

What you need to know about chartering a luxury yacht in New Caledonia:

How to get to New Caledonia

New Caledonia’s national airline Aircalin flies daily from Europe to Nouméa thanks to partnerships with the Air France/KLM group, Finnair, or Singapore Airlines, and its network covers other destinations in the Pacific from its hub in Nouméa. New airport Tontouta is 40 miles from Nouméa.

Where to berth your charter yacht
Lady Christine moored alongside Nouméa’s city centre quay. The commercial dock is the only alternative to anchoring-off for yachts of her size. Less than two miles away, Marina Port du Sud can accommodate yachts of up to 25 metres.

More advice for planning a superyacht charter to New Caledonia

For provisioning, supermarkets Casino, Champion and Geant are dotted around Nouméa. Le Méridien and Château Royal are good accommodation options in Nouméa. Nouvelle-Calédonie Tourisme can advise on proposed visits by superyacht.