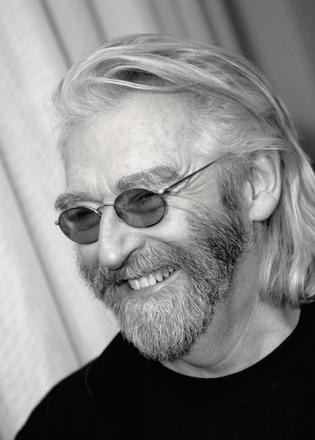 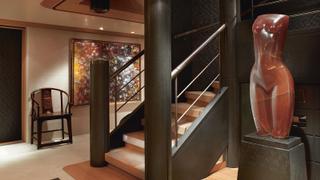 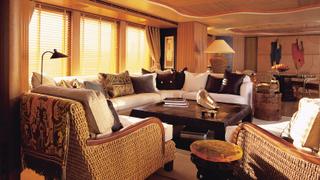 Art on board a superyacht is no afterthought, says designer Terence Disdale. At the very early stages of planning he’ll already be selecting the appropriate pieces for every space...

Terence Disdale is often referred to as the original “rock star” designer – for his signature long hair, cowboy boots and love of music, as much for his high-profile yacht projects. He has designed more than 100 yachts, over half of which have been larger than 45 metres, during his 40-year plus career. With no formal training, Disdale learnt his trade working as a design assistant to the late, great Jon Bannenberg. He went on to set up his own company, Disdale Design, in 1973 and today, from a studio in Richmond upon Thames, London, the designer and his team of 15 work on both the exterior and interior of yachts, as well as on private jet interiors. The studio’s style is distinctly non-corporate, with Disdale favouring a more natural, relaxed interior, which he commonly describes as “beach-house not penthouse”.

Disdale has been involved in the design of some of the world’s most famous superyachts, including the 162.5 metre Eclipse, and the interior design and exterior styling of the 139.3 metre Al Salamah. Disdale has also often collaborated with similarly lauded designer and Bannenberg alumni Tim Heywood on superyachts including Pelorus, Ice, Mayan Queen, Kogo, Radiantand Topaz. Having received a number of honours over the years, in 2014 he won the Lifetime Achievement Award at the ShowBoats Design Awards.

The art on board a superyacht is by no means a finishing touch. At the point of designing the layout, I’ll already be thinking about what will go where and how it will be lit. You can’t come along later and say, ‘oh yes, I want to put some art there but I need a light’. I might not have the exact piece but I’ll know the dimensions and what I’m looking for. I’m thinking about how I’m going to entertain the eye as you walk around the boat. This might be three years before the paintings go on the wall, so there’s a lot of planning involved.

There are practical considerations, like how you’re going to get the item on board if it’s a larger piece, and how you’re going to fix it to ensure it’s safe. We might need to reinforce the floor around a sculpture or allow something to be removable should it need to be stored during a storm.

There are no cabins without art: you need to have life everywhere. There’s a thought about the painting, the object on the table, just to make the place look a bit richer. In and around the whole space you’re thinking what do I want to put here? Do I want colour or interesting texture, or both? There are 450 pieces of artwork on Eclipse, and on Topaz there’s more like 800. So it’s a two-year project once you start shopping.

It’s not just about scattering pieces you like around, you’re also thinking about how the boat is used. For instance, on Eclipse, I wanted a painting to hang behind the owner’s desk in his study. He’s a powerful man, and you have to think, ‘what do I put behind a man of this magnitude?’ It needs to be strong, but if you put a rare or valuable piece of artwork behind him, then whoever is on the other side of the desk will likely be distracted. We ended up with a beautiful, quite dramatic moonlit seascape by a lesser-known artist.

On Eclipse, artworks also acted as markers on the boat. There are three almost identical staircase lobbies, but we created their own identities by using different pieces of art. Any guests on board can then work out where they are by the pieces in the space.

It’s important to bear in mind that a boat is a vacation spot, so the art on board can be a casual thing. You don’t want to be constantly in awe as you walk around. If a client wants a prized piece from their collection on board I’m not going to say no, but I tend to favour emerging artists. I’m not into selling someone a Picasso, I’d rather find the next Picasso; we’ve got enough starving artists out there. There’s also the environment they’re in to consider, if the generator packs up, you might not have air conditioning for an afternoon and if the boat is in Barbados, say, it could ruin a really valuable piece.

We commission a lot ourselves, or I’ll find something I like in a gallery and ask the artist to create another similar piece. I like symmetry in an elevation, things that talk to each other. So we quite often commission things in pairs. The art should talk to the space. There’s no point having a glamorous painting with a gold frame around it in a beach club. We often opt for more natural pieces that talk to the surroundings. You’re on board a yacht after all, not in a penthouse in Manhattan.

This article was first published in Superyacht Interiors, buy your copy here.

The new wave: Meet the contemporary artists inspired by the sea