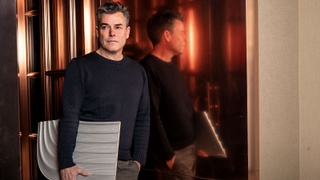 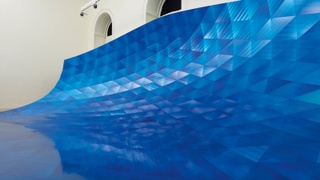 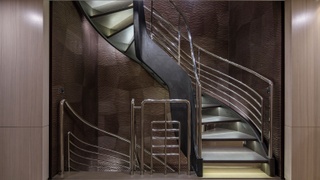 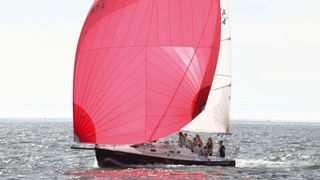 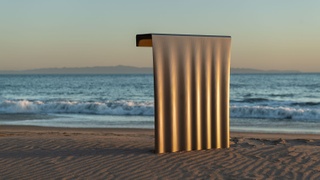 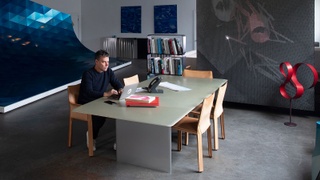 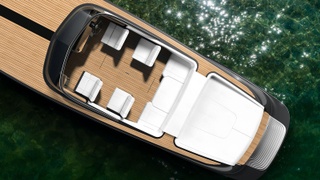 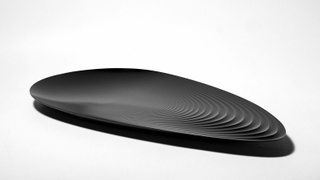 The thing is, we’re boat people,” explains Alex Rasmussen, the president of Neal Feay Studio in Santa Barbara, California. “Yachting is just such an obvious space for us to go into.”

To call him a designer seems something of a misnomer, for Rasmussen is considered by those in the know as the master of aluminium. He collaborates with Apple’s Jony Ive and Marc Newson on a regular basis – together, they created an aluminium desk that sold for $1.7 million (£1m) at Sotheby’s in 2013, and most recently Neal Feay has helped Newson realise an aluminium surfboard. The studio has also made one-off commissions for everyone from Hermès through to Louis Vuitton, while The Wave (pictured below), Rasmussen’s interactive installation at the London Design Festival in 2015, earned him a place in Instagram history as men, women and children rushed to slide down an irresistible, tessellated, bright blue curve.

Now, he’s crept up on the yachting world too – his first project was a spiral staircase, aluminium wall, dry bar and portholes for the refit of the 50.3-metre Feadship Broadwater by Adam Voorhees, completed in 2017.

“I came to yachting late but very intensely, because I went straight into racing,” explains Rasmussen. “My family had horses, so I grew up riding, but I was always trying to find ways to get out on to the ocean.” A surfer since childhood, Rasmussen realised that there would come a point when the physical demands of ripping waves would become too much. A supplier invited him to crew on his J/24, and Rasmussen was hooked.

“I have a J/105 called Free Enterprise, which I bought back in 2001,” he enthuses. “It’s a much better boat with a tiller, so I converted it in the first year, adding an aluminium tiller that we engineered to death. We actually had to add a bunch of weight back in it, to make it legal to race.” True to form, Rasmussen also replaced the boat’s stainless-steel grab rails with precision- machined aluminium ones that “fit beautifully into your hand”, and is working on an aluminium steering wheel, while his “24ft easy parker” slip features a beautiful textured aluminium bathing platform, alongside “various bits of things baking in the sun”. The boats, he explains, act as a testing ground for Neal Feay’s numerous client projects. Everything is put through its paces on deck before it’s offered up as a design solution.

“There are only so many materials that work on a boat, and aluminium’s already been vetted,” Rasmussen explains. “Even Benetti is using aluminium cleats on its production boats, so it’s a proven quantity. And it’s incredibly hard- wearing – that tiller we made back in 2001 looks exactly the same today as it did on the day we made it – and anodising aluminium converts it to aluminium oxide, which is what rubies and sapphires are made up of. It’s extremely tough.” Plus, he points out, it’s lighter than stainless steel. “As we transition away from fossil fuels and towards electric boats, that weight is going to be a big deal.”

Coloured aluminium also opens up exciting new opportunities on deck. “Champagne is fantastic, and coolish tones – greys and blues – look brilliant on deck,” he explains. Black can get too hot to make it a good option, while pink shades fade faster than the others.

“I even have a painting done in blue tones of anodised aluminium sitting in my house by the artist John Millei,” Rasmussen says. “My wife and I have a serious art problem, so we invited a whole load of artists just to come and play in the medium. While they’re developing techniques that work for their art, we’re learning different ways to make purely decorative pieces that work commercially, and which don’t have aspirations in the gallery.”

So, where to begin if you’re looking to bring aluminium into your superyacht? In addition to obvious areas – door handles, walls, grab rails, bars, staircases – decorative chandeliers, sconces and lamps can be particularly effective. “Inherently, aluminium is a great reflector,” says Rasmussen. “You can hide LEDs so that you can’t see them, and the light is bouncing off the metal to give a beautiful soft glow.”

Neal Feay is also looking into creating superyacht spa ceilings. They’re well placed to do so, using the company’s previous expertise as a high-end hi-fi casing manufacturer to create ceilings that seamlessly incorporate all manner of lights, vents, spa systems and more.

“My granddad was making aeroplanes during the Second World War, because you couldn’t get aluminium domestically then,” explains Rasmussen. “He had people from the factory making tools at night, so that as soon as the war was over he could go straight into production.”

Launching with a range of cigarette cases, matchbook cases and women’s jewellery in Neiman Marcus stores, his grandfather went on to fine-tune the aluminium colourising process for which Neal Feay has become known. “As a child, the business was always available, but there was no pressure,” he says. “I was silk-screening parts when I was eight years old.” For a brief period, Rasmussen considered going into the art world, but it was too risky, “and there’s too much nonsense”, he adds.

When he inherited Neal Feay after college, it was a successful but “kind of boring” company that specialised in cosmetic work for super-high- end audio equipment casings. So how did a firm that had specialised in elegant hi-fis for decades go on to build designer console tables, art installations and superyacht platforms?

“That was very specifically driven by the economic meltdown of 2008,” Rasmussen says. “Our business just straight-up disappeared.” Having been fastidious about which projects they took on, the first thing his team did was revisit those projects they had previously turned down, while Rasmussen himself began setting his sights on designs beyond their current remit. “By that point, I was dying to do something new,” he admits, “but frankly for a long time what we were doing was incredibly lucrative – it was hard to say ‘Let’s go out and bash our heads against the wall,’ when the fish had been jumping in the boat.”

Once the studio was back on solid ground, Rasmussen contacted some of the world’s best designers and architects – people he’d been researching and reading about for years in Santa Barbara. He asked them if they might be interested in collaborating, and was pleasantly surprised by their enthusiastic reception.

Today, he’s working with Rémi Tessier to create bold new furniture, fittings and portholes on a number of superyachts, and has a business jet with designer Thierry Gauguin in the works. “Everything that’s in a jet can go in a yacht,” he says. “It’s just that this particular project is going to fly instead of float.” He’s also working with Vita Yachts and designer Borromeo & De Silva to manufacture a custom add-on bathing platform for its electric tender, the Vita X, which was unveiled at this year’s Salone del Mobile in Milan. “Alex is doing things that no one else is doing,” says Vita’s founder and chairman Stewart Wilkinson, “and we’re both trying to bring art, form and function together while respecting the environment around us.”

The platform will also be on show at the Monaco Yacht Show in September, along with a range of outdoor furniture for Sutherland that “will use yacht-related design language”. For Rasmussen, having spent three years visiting the event as an outsider, it will be thrilling to have some work of his own to present to the yachting community. “I have a lot of work to do,” he admits, “but it’ll be nice to be able to say ‘Go and look over there, go see that.’”

Meanwhile, his love affair with yachts is ever- increasing. “If you look at surfboards or boat hulls, they’re beautiful in the same way that a bird diving into the waves or a fish is. I think anything that moves through water has a mesmerising natural beauty,” he says. “Plus, I’m just in love with the ocean. Swim in a pool? Oh god, no. Why do that when we have waves?”