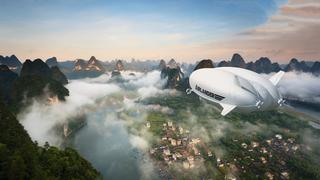 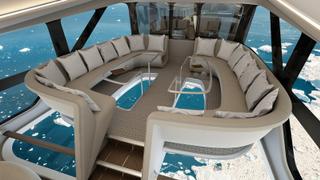 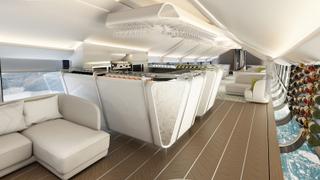 Airship enterprise: Inside the Airlander 10 airship

Yacht owners know the pleasure of drifting along slowly and silently in the sunlight while watching the world go by, preferably with a perfectly mixed gin and tonic in hand. But imagine being able to do that in the sky.

The chance came considerably closer at the UK’s Farnborough International Airshow last summer, when Hybrid Air Vehicles (HAV) announced that its remarkable Airlander 10 airship had left the prototype stage and was ready for production.

Described as a “superyacht in the sky”, the 92 metre blimp is the world’s longest aircraft and can remain airborne for a week. With a top speed of 148km/h, it isn’t aimed at the traditional jet set, but at those with time on their hands who relish the thought of wafting above the ground while taking in some of the world’s most spectacular scenery through floor-to-ceiling windows. Highly adaptable, the Airlander 10 can be used for industrial applications to deliver cargo in areas that planes or helicopters can’t access – or, more interestingly, can be luxuriously appointed for high-end travel, both metaphorically and literally.

Hybrid Air Vehicles, which is based in Bedford, UK, used the Farnborough show to debut potential configurations for the cabin, which sits beneath the giant, helium-filled hull and can carry 18 passengers. Yacht and aircraft design consultancy Design Q (the brains behind Virgin Atlantic’s Upper Class cabins) was commissioned to envision various interiors for the airship, and has so far come up with everything from the ultra-luxurious Infinity Lounge to a modular, multi-room design and a fully fitted cocktail bar for entertaining in the skies – all replete with wood flooring, silk carpets and vast sofas.

Howard Guy, Design Q’s CEO, describes Airlander 10 as “the Orient Express in the sky” (hopefully without the need for Hercule Poirot), citing its ability to take passengers gently and quietly around areas as remote and diverse as the mountains of Patagonia or the Amazon delta. Powered by four large and lazy V8 diesel engines, it really does seem to be the very antithesis of private-jet travel in as much as it is designed for going slowly, thus providing an antidote to the often hyper pace of modern life.

Prices have yet to be confirmed, but I have been reliably informed by HAV that the entry level will be in the low 10s. (That’s 10s of millions, of course...)