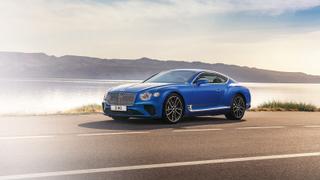 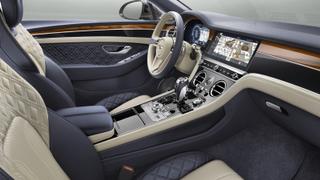 Many people can remember their first boat journey, but it might not be so common for a person to have memories of the first car they ever travelled in. Mine, however, are crystal clear.

It was my mother’s 1954 Bentley R-Type, UK registration mark TRA 474, which was finished in a delectable combination of Seychelles blue over silver paintwork with stone-coloured upholstery and maple veneers. I journeyed in style in its various passenger seats for the first five years of my life, sometimes with a plastic steering wheel suckered to one of the rear picnic tables.

Even now, decades later, a blue-clad Bentley gets me every time. So the moment I saw that the new Continental GT was cloaked in a rich coat of “sequin”, I knew genuine objectivity was going to be difficult to summon. The situation isn’t helped, of course, by the fact that most early reviews of the car have been raving – in the good sense.

The new Continental didn’t really have much option other than to be exceptional, since the two model generations that went before it took Bentley from being a maker of exclusive automobiles for the few to being a luxury success story on a global scale, with more than 65,000 sold. The first mass-produced Bentley in history – the most comfortable, most reliable and speediest ever to have emerged from the Crewe, UK factory – became a professional footballer’s favourite from its launch in 2003 and went on to all but democratise the marque.

This third-generation model takes things to another level. Based on the underpinnings of the Porsche Panamera (Bentley now belongs to Germany’s Volkswagen Group), it’s markedly lighter than the outgoing model, swifter, better handling and more economical – although 12.2 l/100km combined is not exactly planet-friendly.

What really impresses about the new Continental, however, is that it is an even more competent continent-crosser, a fact that makes it difficult to resist the urge to drive it, even when going out isn’t strictly necessary.

Bentley aficionados might be surprised to learn that the boot lid is made from weight-saving plastic. But fear not, the steering wheel isn’t. And it’s not held on with a suction cup either.