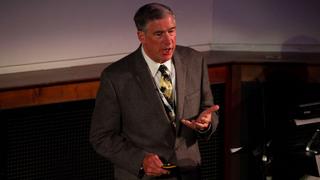 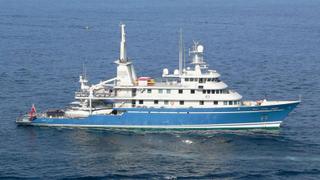 Ocean Talks 2018: Captain Philip Renaud on saving the reefs, one yacht at a time

Captain Philip Renaud, executive director of the Khaled bin Sultan Living Oceans Foundation, explained what people can do to change the course of ocean deterioration at Ocean Talks 2018…

Oceanographer Captain Philip Renaud has been on numerous expeditions out on the oceans for the sake of marine science and conservation, including a circumnavigation of the globe on board 66.75 metre research vessel Golden Shadow. As executive director of the Living Oceans Foundation, he is dedicated to its mission to make ocean conservation a high priority and to encourage people to keep ocean resources healthy and sustainable. The Foundation does this through its research, educational programs and outreach projects.

Renaud shared the Foundation’s four-pronged approach with the audience of Ocean Talks 2018: tech innovations, behaviour changes, citizen science and the direct funding of conservation groups. “There’s a group at Cambridge University that’s working for UNAP (United Nations Association of the Philippines) and they believe that implementing wide-scale behavioural changes will have the most power to change the trajectory of ocean conservation,” he said. “So I really believe in that.”

Coral reefs harbour so much biodiversity and are the nursing ground for about 25% of all the fish in the sea. It is not news that their economic value is immense, but Renaud noted that revenue from tourism in developing areas is at least 25 times more than the fisheries value and far more likely to be returned to that community. “You realise that these people rely on the reefs for their entire life,” Renaud said. “Their entire life is driven from products and services from the reefs.”

There are many day-to-day behaviour changes that can be applied to the yachting community, including supporting responsible tourism and dive operators, supporting local campaign groups, not allowing the collecting of shells or corals by guests and choosing to source sustainable seafood. Renaud also highlighted superyachts such as the 58 metre hybrid-electric sailing yacht Ethereal, the in-build eco-friendly 58 metre Soliloquy and the 31 metre solar-powered vessel Tûranor PlanetSolar as highly innovative and inspirational vessels.

With coral reefs disappearing twice as fast as rainforests, a lot has to be done. “Around 20% of coral reefs have been lost in my lifetime and as I went around the world diving on these reefs and looking at them, I felt a terrific exhilaration at being so lucky to see these reefs and then I felt a terrific burden from seeing them disappear,” Renaud explained. “Sometimes I’d come up from a dive and I would think that I just dove on a crime scene, it really is devastating to see.”

However, Renaud emphasised that ‘ocean optimism’ is truly key to improving the state of the world’s waters, concluding, “Keep optimistic and I think we’ll all be able to make a difference in the world.”

Ocean Talks 2018: Discovering the huge coral reef at the mouth of the Amazon