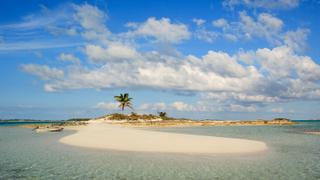 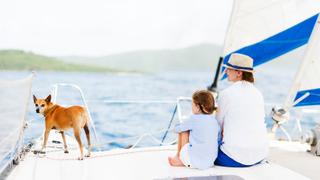 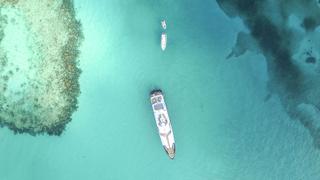 Darling on deck: Kristin Ducote on the perils of private islands

If you untie a boat too soon, you can quickly find yourself on a hostile private island and in Depp water. Kristin Ducote drips with regret...

Glass doors on either side of the dining room were thrown open to our moonlit anchorage and the silvery curtains twisted on the cool salt breeze into the night. Over the last sips of a fine Château d’Yquem to cap off our dinner, my in-laws’ King Charles spaniel stirred under the table. Then he began to whine. “Poor guy, he needs to go to the beach.”

Usually the lowest guy on the crew totem pole would take him out for his evening potty run, but dinner had stretched over great conversation and most of the crew were done for the night after a full day of activities. “We’ll take him,” my husband, Chapman, offered. I looked down at my Missoni dress and pinched an inch of shimmery fabric. “Don’t worry, Princess, you won’t get wet.” Famous last words.

From the open beach club, we stepped onto the Williams tender. It could edge right on to the beach, allowing us to jump off the bow, no splashing, no wading, just as promised. I peered over its inflatable edge into the dark water.

Before dinner we had all gathered to watch the first mate fillet the day’s catch and the teeming soup of sharks it attracted, so many they glided across each other’s backs for the choicest scraps. Once on board, I settled the dog and then, trying to be helpful, untied the line and pushed us off. Caught in the current, we moved steadily away as I waited for the engine to start. And waited…

I looked over my shoulder at Chapman, as he searched cup holders and looked under cushions. No key. After a string of creative expletives, during which time we only drifted farther away, Chapman turned to me and asked, “Rock, paper, scissors?” Finally accepting reality, he stripped down and leapt overboard.

Immediately, the dog launched after him. No, he’s shark bait! After we hoisted the flailing pup back into the boat, he sat sopping on my lap, soaking me to the bone and shaking repeatedly just to add insult to injury. Together, the dog and I watched Chapman glide through the water and slip on to the deck like a navy seal.

Unwilling to admit our overeager disembarkation, Chapman found the key in the beach club without help and did a spectacular swan dive, swimming back to us before anyone could notice. The engine started right up and we tore across the channel to the nearest beach, wide and white in the moonlight.

As we pulled up to the sand, I saw a large sign hand-painted in bright red letters. It said: “THIS IS NOT DISNEY. YOU ARE NOT WELCOME.” We had stumbled on Johnny Depp’s island – and he does not (apparently!) play well with strangers.

Even as we sat there, he could be hiding in the bushes with a quiver of blowdarts tipped with toad poison…

Now all us inveterate moviegoers know that no one can play crazy quite like Johnny Depp. He’s not the celebrity you want hunting you down in the dead of night on a deserted beach. Even as we sat, dripping in the tender, he could have been hiding in the bushes with a quiver of blowdarts tipped with toad poison…

“Beaches in the Bahamas are public up to the high water mark,” Chapman said, eyeing the moonlit sign. “I’ll stick close to the water.” I smacked the roll of doggy bags to his chest and said, “If a crazy person runs out of those bushes, I’m outta here.”

By the time we finally got back, all three of us safe, but sopping wet, I had learned a valuable lesson that will stick with me for life. So basic it’s easy to forget, but trust me – never untie a boat before you start the engine!

Darling on deck: Kristin Ducote on buying boats at auction

Darling on deck: Kristin Ducote on why you should beware the novice sailor