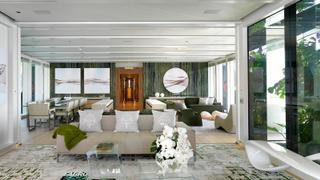 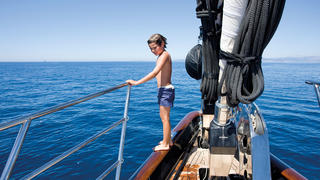 Darling on deck: Kristin Ducote's advice for an interior redesign

It was early June in 1981 on a 20 metre Hatteras when a little boy accepted a paper plate piled high with steaming lasagne. With wide, excited eyes he turned toward the banquet, thrilled with his manly allocation. In that moment, the boat lurched with an unexpected wave. The boy flew forward in slow motion, arms outstretched like Superman. His family gasped in unison as the lasagne wobbled in mid-air... and yes, the paper plate crumpled. With an audible splat, it landed face down on the creamy silk of his mother’s newly recovered sofa.

Nearly four decades later, the little boy (now my husband) is all grown up, but the memory of that day remains sharp. He can still smell the lasagna. He remembers the exact soft stripe in the cream fabric. In fact, with all the ensuing drama and tears, everyone on board that day remembers the moment, although now with a little laugh thanks to the softening of time.

When it’s time to redesign your yacht, ask yourself, what’s more important: form or function? The answer depends on your mission profile. Do you want a sparkling showpiece designed to impress the critics and grace the cover of our next magazine? Or do you want a comfortable family environment filled with durable furniture that won’t strike anxiety in the hearts of your grandchildren over spilled milk?

Don’t get me wrong. There is definitely a place for form in your yacht redesign. Spectacular modern interiors can differentiate your yacht from all the others in its class, boost its value and increase its liquidity in, let’s be honest, a fairly illiquid market. But, like everything in life, it comes down to finding the right balance and evaluating the true cost.

Those cashmere Hermès throw pillows may make the salon décor pop, but will they push you into anxiety overload when your slightly sloshed cousin spills red wine after an especially funny joke? If you start the design conversation with the right question (and don’t forget to hire a professional designer/marriage counsellor), you will end up with an inviting space that will be just right for you and your family.

Four decades from now, you don’t want your family’s most vivid yachting memory to be a dramatic upholstery casualty. Instead I hope you reminisce about that sunset bonfire on a deserted beach or the first time you saw a nurse shark sashay through the teeming city of a coral reef. My advice: make a mindful decision on whether form or function is more important to you and your loved ones and start your remodel from there. Just don’t forget about the little boy and his heaped plate of lasagne.