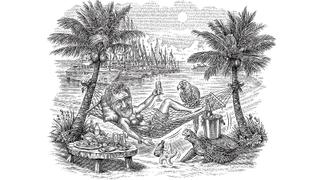 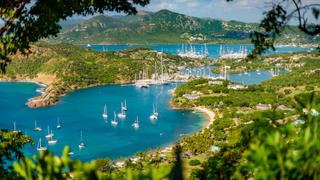 Lippy from the Liffey: Eddie Jordan on his favourite marinas and showing support for the Caribbean

There's nothing like tendering in to an Antiguan beach for lunch, says Eddie Jordan, or mooring at Nelson's Dockyard, or that spot in Golfe-Juan...

I take a boys’ trip out to Antigua each year to coincide with the Antigua Charter Show, and this year I thought it was important to get out and show some support after the hurricanes. Antigua was relatively fortunate but some of the Caribbean is still pretty devastated, like Bitter End, Tortola and St Barths.

But Antigua was buzzing. All the restaurants and bars were full and there were a lot of really nice boats there, particularly American ones. I spoke to a few charter brokers and they said the scene was active and there was a good feel about the place, which is hugely encouraging.

One night there was a big fundraising event for Barbuda, which raised a tonne of money. The party was a lot of fun, bands played for free and there was a real sense of togetherness. I think everyone was just happy to have some boats there. A bunch of people came up to me to say: “We’re so happy to see Lush here. We weren’t sure you were going to come.”

We sailed every day we were there and had over 12.5 knots regularly on the boat. We were sitting on the rails, looking out and having a few beers. There’s nothing in the world like it.

We tried to eat on board each night but we always had lunches out. We’d end up in Jacqui O’s or Catherine’s Cafe in English Harbour. I played gigs at both places. And, of course, we would go to the parties at Abracadabra. But lunch was the best. You’d sling the anchor and tender in to the beach, dragging it up on the sand. The crew would always come with us because at this time of year, after they’ve just done a difficult crossing, it’s important to do a bit of bonding.

One of my favourite marinas is in Antigua – Nelson’s Dockyard. It’s like going back in time. The capstans there are actually from Nelson’s time. Then there are some really difficult marinas. St Barths is a shocker. Half the time you go in there you have to leave because of the swell. The people that go in there stern-to are the party people, whereas I like to anchor out.

From an old-fashioned point of view, nothing beats Saint-Tropez. It’s always a drama to get in and you have to book a long time in advance, but it’s wonderful once you do. One of the best berths you can get in the South of France is against the capitainerie wall at Golfe-Juan. You’ve got the shops, you’re able to walk into town and the train will take you all over the place. For food, it’s hard to beat Antibes – check out Le Michelangelo.

I’m a great advocate of owning your own berth. I own a 50 metre berth in Porto Montenegro, which I’ll sell soon now that I don’t own Blush any more. The only thing is I wish those ports owned by municipalities would be a bit stricter about the boats in them. Some of them sit there for three, five, eight years untouched and are so dilapidated that they bring down the tone of the whole place. If you’re a boat owner or own your berth, there should be some kind of obligation for you to take care of your boat.

I am grateful for one thing – that I don’t ever have to park a superyacht in a tight berth alongside a busy quay. It’s like teeing off in front of a packed clubhouse – you’re going to mess it up, aren’t you? How can you show your face after smacking your stern into the concrete quay? But I suppose that’s why God invented captains.

22 of the best yachts available for Caribbean charters

Buoys Only: The best anchorages in the Caribbean