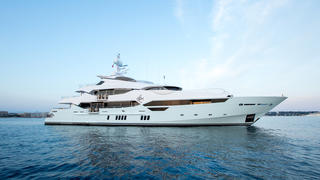 Built in GRP by UK yard Sunseeker International to RINA class and MCA coded, Blush was delivered in 2014 as the first in the yard’s flagship 155 Yacht series. A streamlined, modern interior accommodates 10 guests in five cabins including a full-beam master suite on the main deck with a starboard fold-down balcony. There are a further two VIP suites on the main deck while below lie two twins convertible to doubles and all cabins have entertainment centres, Samsung television screens and en suite bathroom facilities.

The large main saloon boasts comfortable seating, a bar, side balcony, formal dining area and an entertainment centre including a 55-inch Samsung television screen and a Bose Lifestyle surround sound stereo system. Meanwhile, the upper saloon features fold-down sea terraces on either side, a bar and an entertainment centre including another 55-inch Samsung television screen.

The extensive sun deck has sun pads aft and a spa pool forward, plus a bar and dining area under the shade of the radar arch. Blush is the first Sunseeker to offer a fully-fledged beach club offering easy access to the water for toys and tenders, along with sun loungers and a 32-inch Samsung television screen.

She has proved to be a very successful charter yacht. With a flexible deck layout and bars on all three decks, she is also considered to be one of the best party charter yachts and has been regularly spotted at the Monaco Grand Prix and other major Mediterranean events.

Twin 2,950hp MTU diesel engines give her a cruising speed of 15 knots and a maximum range of 4,000 nautical miles.