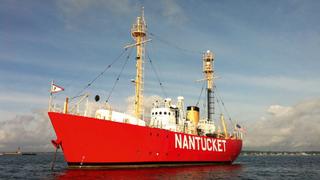 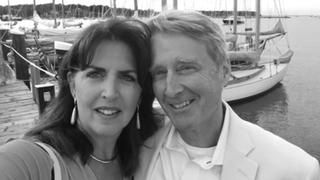 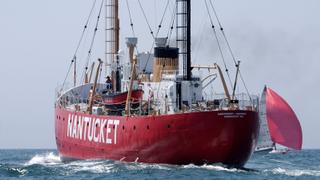 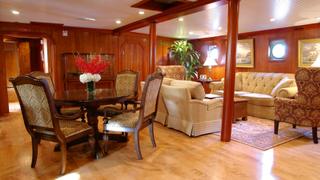 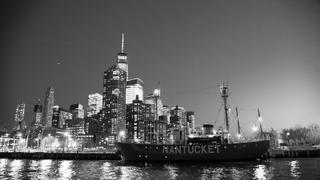 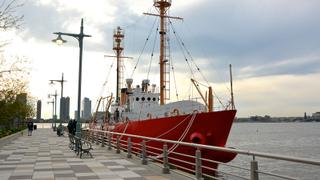 On board with Bill Golden, owner of the 39m Nantucket Lightship

While he always knew he would one day live on the water, he never thought it would be on a lightship. Superyacht owner Bill Golden tells Grace Trofa how he came to own a piece of history...

It takes chutzpah to buy a ship on eBay. And not just any ship – the largest ever sold through the online auction site: 39 metres long, 9.1 metres wide and carrying 22.5 metre masts. At the time, she was carrying 61,000 gallons of liquid ballast, including 49,000 gallons of fuel – enough to circumnavigate the globe without refueling. She carried both 7,000lb and 5,000lb anchors and every 1.8 metres of chain weighed 200lb. “When you dropped that sucker, the mission was to stay put and most of the time she did,” remarks the ship’s proud (and brave) owner, Bill Golden.

For a man whose childhood home overlooked three of Boston Harbor’s lighthouses – the Graves Light, Minots Ledge Light and the Boston Light – plus the Boston Lightship before it was scrapped, owning the Nantucket Lightship was beyond his wildest dreams.

Golden grew up in the coastal community of Cohasset, Massachusetts, and has had some involvement with the sea most of his life. “I remember my first scuba diving outfit; it was a kit that came in the mail, a series of cutouts like a dress pattern with yellow neoprene strips to cover the seams. When finished, I looked like Gumby in a Halloween costume.”

Remember when kids had paper routes? Golden, in his father’s 4.5 metre Thompson lapstrake runabout, would motor over to the Boston Lightship, where crewmen, hungry for news, would barter the newspaper for goods desirable to youngsters, like five-gallon cartons of ice cream. The proceeds from that paper route allowed him to buy his first boat, a 3.6 metre Delano dory, and with a friend Golden established a thriving business selling lobsters for 65 cents a pound. At 16 he picked up a “reject” 3.9 metre Boston Whaler, followed by a 3.6 metre Boston Whaler, but that boat never made it into the water. Golden, then 29, was just beginning his political career and the next time he would taste boat ownership would be 22 years later when he bought the 39 metre lightship.

In both appearance and politics, he’s akin to a Kennedy. His Boston accent (“harba”) is still evident, and just for good measure he is the great, great, great grandson of a witch who was hanged in Salem, Massachusetts. He’s worked in every level of government, from the White House to City Hall, and has always had a strong commitment to the environment. Golden was recruited straight out of college to work for the Nixon administration in the White House on the creation of the EPA and NOAA. “I think I was the resident hippie,” he jokes.

He further burnished his political CV when he was tapped to become city attorney for the city of Quincy. “I accepted the position on the grounds that we would do something about the pollution in Boston Harbor, but after six months nothing was happening. One day, running on the beach, I thought I was running through stranded jellyfish; instead it was raw sewage. I was so angry, I marched down to the mayor’s office with all that raw sewage on my sneaker, trod over his beautiful blue carpet and put my sneaker foot on his desk. I said this stuff is all over the beach and we have to do something about it. We filed a lawsuit that led to the clean-up of Boston Harbor and the creation of the Massachusetts Water Resources Authority. After that I spent six years in the state senate, ran unsuccessfully for lieutenant governor and went from writing 25,000 Christmas cards to my constituents to moving to Jakarta, Indonesia. I figured it was time to step back from my political life.”

While working as a partner at a large Boston law firm he had the opportunity to help reopen the Quincy shipyard. The idea was to have Indonesia buy ships from the shipyard and for those ships to transport liquefied natural gas from Indonesia to New England. Though that deal didn’t work out, he fell in love with Asia and set up offices with Japanese and Indonesian business partners throughout the region. For the next 10 years he worked on environmental energy deals and problem solving for American companies over in Asia. He also became involved in the aboriginal rights of tribes in eastern Indonesia. “I don’t like to see people pushed around,” he says. “And I don’t like to lose for the next generation what we have enjoyed, such as our natural environment.”

On one of his frequent trips back to the US where he still maintained a Boston office, Golden learned from a colleague that the Nantucket Lightship was being offered for sale. “He knew I wanted to live on a yacht,” Golden explains. “The deal with my wife, Kristen, who I had married a few years before, was that someday we would live aboard a ship. I think he was half joking when he suggested the lightship, but more out of curiosity we agreed to take a look at this unusual offering.”

The Commonwealth of Massachusetts had owned the Nantucket Lightship for 12 years and when it became “surplus property,” the idea was to sell it for scrap, for it was built like a steel tank with a pilothouse of solid bronze. “It was cold, smelled of diesel and had asbestos on the deck. I came home thinking, ‘Oh well, that’s a pity.’ But I’m sitting at my home office off Newbury Street in Boston and, all of a sudden, I can’t think of anything else. I’m riveted on the concept. I raced back, begged the guy to give me a tour, which lasted two hours, and then came home to have a talk with my wife. I had this feeling when you know something should be done and you have the ability, that you have a moral imperative to do so,” he remembers.

The ship had served its community well, warning of Nantucket’s dangerous south shoals. By day, its bright red colour with white letters acted as a billboard; at night, ships were warned by the beacons. In fog, the horn blew for three seconds every 30 seconds. “We once had her in Quincy Bay and we set off the fog horns,” Golden says. “We got a call from the John F Kennedy Presidential Library and Museum saying don’t ever do that again because the whole glass front of the museum had begun to oscillate.”

Kristen, who has a background in design and architecture, took on the conversion project, as general contractor as well as interior architect and designer for the entire refit. The Goldens hired 12 workmen off the dock in New Bedford, old timers and skilled artisans who worked a six-day schedule and completed the project in 18 months. They kept the exterior historic and gutted the interior. “We ended up with 4,000 square feet of interior space and turned it into a luxurious yacht with six cabins, six baths, oriental rugs, marine oil paintings and eight air conditioning and heating zones. We enjoyed the space so much we brought our son Braden home from the hospital when he was born and raised him on the ship for six years.”

Since then, it has been 17 years of adventure and stories. “One night when we had the ship at the dock in Boston Harbor, during a wild snowstorm, the winds were howling, the dock undulating, and suddenly around 11pm we hear a banging on the hatch,” says Golden. “It was a bunch of Coast Guard special forces guys, in full gear, bouncing around in this big inflatable. They had spotted the boat and wanted to know if they could have a tour. We had them aboard, gave them some hot chocolate, did the tour and sent them on their way.”

Or there was the time when they, moving slowly through fog on Cape Cod, came across a fishing boat full of older fishermen who hadn’t seen an operational lightship in half a century. “They looked up at us like we were a ghost ship coming out of the fog. Lined up on the deck, they were making the sign of the cross on their chests. We rushed out waving our arms to assure them we were real.”

United States Senator Ted Kennedy was a frequent visitor when racing in Nantucket. “He was really an extraordinarily charming guy, a great storyteller and a skilled sailor. When he passed away we moved the lightship right outside his home in Hyannisport, dropped anchor, and in his honor we beamed our searchlight on his beloved sailboat Mya. He was a great friend and we miss him.”

The theme of public service runs right through the Goldens and their boat. The ship was docked off Tribeca in New York City when Hurricane Sandy hit, and to see the financial capital on her knees touched a nerve. Golden helped form the National Institute for Coastal and Harbor Infrastructure, focused on changing federal policy to one of planning and investing in an interstate coastal infrastructure. Next summer, in 2019, the lightship will circumnavigate the entire US coastline to raise awareness of the new reality of rising sea levels, extreme storms and ageing infrastructure. “It’s the perfect symbol at the perfect time to bring a dramatic change to this country.”

In 2014, unable to resist its charms, Golden acquired a second lightship, the sistership to his existing one. Fortunately, it came fully restored. Golden will eventually dock it in New York City for it to serve as both a museum and a restaurant for city folks nostalgic for a taste of Nantucket, but currently both of his lightships are berthed in New Bedford, Massachusetts, side by side, probably the first time they have been together since their retirement from light duty in 1983. Their days of keeping ships off shoals are long gone, but their life of public service is still far from over.