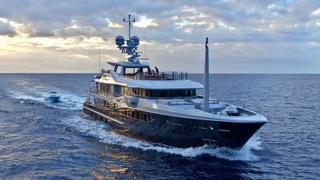 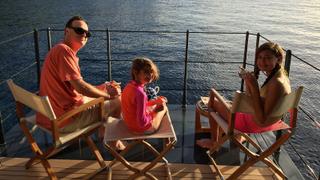 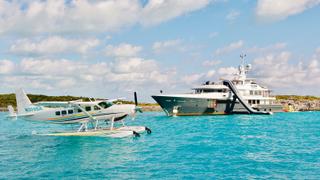 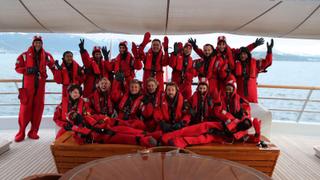 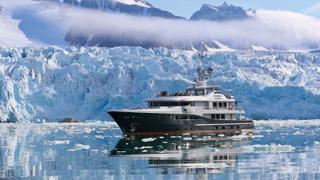 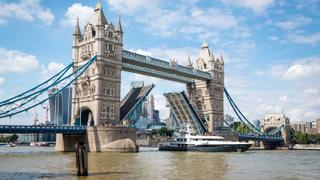 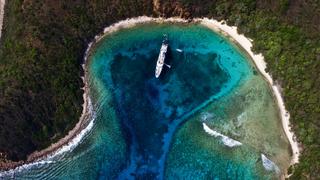 On board with Jonathan Rothberg, owner of 55m explorer yacht Gene Machine

The US scientist behind high-speed DNA sequencing tells Marilyn Mower how his 55 metre AmelsGene Machine affords him time with his family – and a laboratory for his daughter...

The owner of 55 metre Gene Machine pads into the upper saloon dressed in his vacation uniform of shorts and T-shirt, fresh from accompanying his younger children to the Atlantis water park in the Bahamas. He is taller, tousled and far more gregarious than I had expected for such a renowned scientist. His bare feet put me at ease as much as his engaging, broad smile. And he laughs easily as his littlest son zooms through the room in a dripping bathing suit.

“Thanks for meeting us here while the kids are on vacation. So, what do you want to talk about?” he asks. I expected the interview to focus on the yacht’s 9,000 nautical mile journey last year from the French Riviera to Svalbard, Norway, but it turns out that that would be starting the story in the middle...

Dr Jonathan Rothberg is an American chemical engineer and biologist, inventor and entrepreneur. The fact that his Amels Limited Editions 180 is named Gene Machine gives a clue as to his business, but his original motivation for inventing a high-speed “next-gen” DNA sequencing process was simply to find a way of positively impacting the lives of people he loves.

Frustrated with the slowness of diagnostics and treatment of diseases that may be controlled by DNA rather than environment, he immersed himself in genetics and computers. Rather than a months-long, server-dependent process to pick away at genetic code, Rothberg’s genius led him to look at the issue in an entirely new way. In 1991, while still a postgrad at university, he founded CuraGen, one of the first genomics companies. It focused on the way proteins encoded in a genome function together and the research led to the development of drugs for skin and breast cancer. His second company, 454 Life Sciences, brought to market the first new method for gene sequencing since the 1980s by unlocking a parallel DNA sequencing process capable of cataloguing whole human genomes for the first time. It was revolutionary and is the basis of all subsequent high-speed gene sequencing methods.

“My mother bought her first yacht when CuraGen went public,” he says. That yacht, Lucky Seven (named after his mother’s seven children), was where Rothberg’s brood got their first taste of the yachting lifestyle.

In 2007, with a new company called Ion Torrent, he continued his work on DNA sequencing, developing a method to decode an entire human genome – not on a massive mainframe but with a semiconductor chip that costs just $1,000. When Ion Torrent was acquired for $725 million in 2010, Rothberg set about developing his own yachting experience with a 130 Westport.

The Bahamas and New England were pleasant enough cruising grounds on his 40 metre Gene Machine (now Lady Pegasus), but he wanted to show his children more of the world. He wanted a steel full displacement yacht and he wanted a Dutch build. With eldest son Noah, a freshman at Yale, and middle daughter Elana often in tow, they visited many of Europe’s top yards discussing custom builds. They eventually settled on a new build at Amels, “but by the time the yard could start the build, the delivery date would mean we would miss three summers. To me that was unacceptable”, Rothberg says.

Summers for the busy family (mum Bonnie Gould Rothberg has a PhD in chronic disease epidemiology and is a practising MD and assistant professor at Yale) are devoted to the children, of which there are now five. “My children are incredibly close and being together on board a boat 14 to 16 weeks a year is part of that. I love giving them unique experiences,” Rothberg says. He notes he sometimes gets into trouble with his siblings for “stealing” his nieces and nephews, who love nothing better than joining his kids for a holiday. “We always have cousins rotating through the boat.”

Their search switched to the brokerage market for the quick acquisition of a yacht that would allow them to cruise anywhere regardless of weather. Noah recalls vividly “getting beat up” when trying to go upwind to St Barths in their previous Gene Machine, which was semi-displacement.

“We had actually seen this very boat,” says Rothberg. The 55 metre Amels, Engelberg, was being built for a European family. “But it was under contract. I was trying to figure out what our next step would be when we received a call that the sale had fallen through and that Engelberg was available after all. I think my daughter Elana was really happy with that. She liked the boat and she told me she wasn’t sure she trusted my taste with a new build,” he says, laughing. With Pullman bunks for sleeping extra friends and a colourful “Nemo Room” already in place at the stern, the boat was a perfect fit. And so a deal was struck.

“I understood that the family would be spending a lot of time aboard,” says Captain Fraser Gow. “What he meant was five and a half or six months of the year! He likes the boat so much we have to kick him off for maintenance periods.” Gow had been second captain on a sistership to Engelberg when two of the Rothberg children happened to meet him while boat shopping. “They checked him out first,” chuckles Rothberg.

“We spent the first summer with them in the Med,” continues Captain Gow. “Then the owner asked me for cruising suggestions. I put together a proposal to visit London followed by a month’s cruising in the northern latitudes. I was a bit ambitious I guess; sometimes we were steaming all night to our next destination.”

Gow calls Norway the most underrated and most magical place you can take a superyacht. “We spent two weeks there covering every vein of every fjord. With a string of islands offshore, it is much like the Inside Passage to Alaska. The vast majority of our cruising was in flat, calm water.”

For the trip, Rothberg added two forward-facing sonars to Gene Machine’s equipment list and put WASSP sonar systems on the tenders. Gow equipped the yacht so that the family could continue to do all the water sports they enjoy in warm water. “We just went from nylon skins to wetsuits to dry suits,” he says. The family went paragliding above glaciers, watched polar bears, swam with whales, had barbecues on beaches, watched the Northern Lights and took in the midnight sun.

“Most people on boats take pictures of whales swimming at a distance,” says Noah. “We took pictures of ourselves swimming with them. I never in my life thought I’d see a blue whale and we saw a blue whale. The fjords in Norway taught me something about the scale of Earth.”

Svalbard, just 650 miles from the North Pole and the northernmost year-round settlement on the planet, was a highlight for all on board. “A local food co-op delivered fresh produce to the boat and there are three excellent restaurants for dinners ashore,” says Gow.

At no point during the yacht’s adventures has work stopped for Rothberg. His continuing research has led to breakthroughs on the decline of bee populations and the efficacy of organ transplants. He seems indefatigable. And if he can’t figure out how to fix a problem, “I go find the people who can”, he says. His efforts were recognised in 2015 when he was awarded the United States Medal of Technology and Innovation by former President Barack Obama in a White House ceremony.

Rothberg, who holds more than 100 patents himself, now heads a biotech incubator called 4Catalyzer, formed with the aim of transforming 21st century medicine. Part of that is looking at ways to remove bottlenecks from the healthcare system. One of its inventions is the world’s first hand-held whole-body scanner from Butterfly Network that displays real-time diagnostic images on a smartphone, revealing deep tissue and bone. The device has received FDA approval and costs just $1,000 – heralding a revolution in affordable quick-fire diagnoses.

“Our first goal was to make an imaging system cheap enough that it could be available in even the poorest corners of the world,” says Rothberg. “It takes about an hour to train someone on the equipment.” The next development is adding AI or “deep learning” so that the system can begin to automate diagnoses. When I suggest he’s an altruist for bringing a device to market that could transform lives in areas not easily served by expensive imaging equipment, Noah responds quickly: “He likes to maximise utility.”

For summer 2018, Gene Machine will be mixing business with pleasure. Elana, who is a student at the exclusive Choate Rosemary Hall in Connecticut, is studying the Earth’s smallest self-replicating organism – bacteriophage – which is densely concentrated in seawater. Phages are viruses that live in bacteria, some are helpful and some are harmful. Identifying and manipulating their genome could have a monumental medical impact and serve as a canary in the coal mine for global warming.

“One of the very few changes we have made to Gene Machine is to set up a lab bench for Elana in the sky lounge to test the samples she will be collecting. She’s going to be testing out my latest machine,” Rothberg says with a wink. “We are calling it the Quantum SI Machine.”

Noah appears more design-minded, and switches the conversation to the exterior styling of yachts as diverse as Black Pearl, Sailing Yacht A, Tango and Symphony. He laments that the Monaco Yacht Show comes at a bad time for his academic schedule. There are new boats he wants to tour. “We are going to design the next yacht ourselves,” he says.

With a family like this, I for one can’t wait to see what they come up with.

On Board With Ian Malouf, Owner of 52m Superyacht Mischief

On board with Sir Lindsay Owen-Jones, owner of 30m sailing yacht Magic Carpet 3