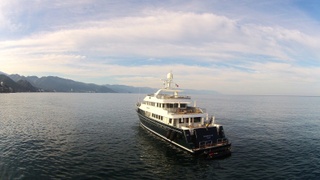 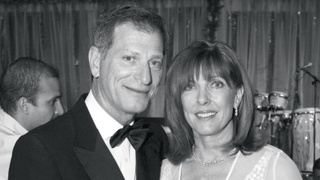 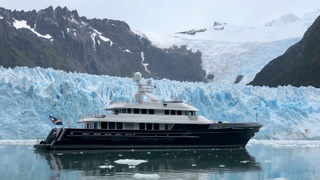 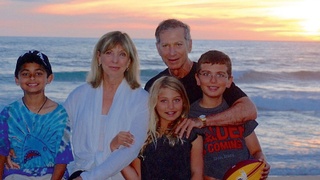 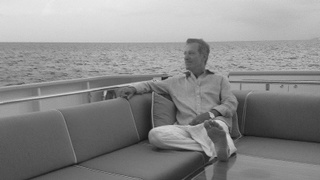 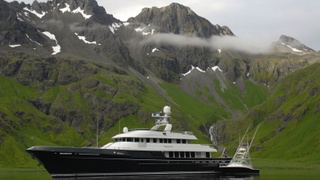 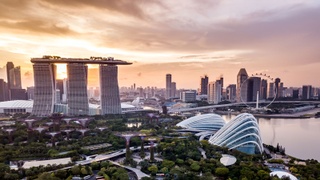 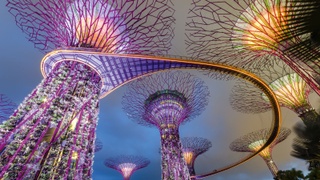 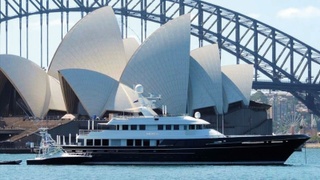 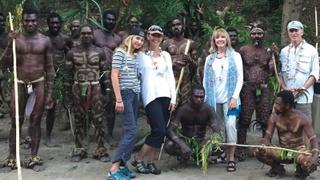 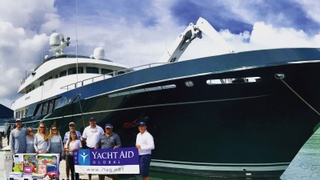 The US power couple have enjoyed business success, diplomatic postings and running a family foundation – and they still manage to travel the world on their 45-metre Dorothea III, as Cecile Gauert discovers

When I meet Steven Green and his wife, Dorothea, they are enjoying time at their holiday home near San Diego, California. It blends with the scenery on a hilltop, removed from any hubbub but close to family. From the terrace, a gentle slope leads the eye to a pond filled with koi and water lilies, a small orchard and a vegetable garden beyond it. The Pacific is further west, beyond the hills at the horizon.

“My next boat will fit in this pond,” Steven Green says as we walk around the property, which is bursting with the natural gifts of the California spring. After admiring the bounty of the vegetable garden and the splashes of colour in the free-flowing flower garden, we walk back up to the terrace and resume our conversation by the outdoor fireplace on an uncharacteristically cool day.

Their current boat, 45-metre Dorothea III, is in a much bigger pond, awaiting their arrival in French Polynesia. They bought the Ron Holland-designed explorer, built by Cheoy Lee, in 2011. The yacht’s captain, John Crupi, who keeps meticulous records, says they have covered 165,000 nautical miles since then, visiting remote places such as the Marquesas, Kodiak, Vanuatu, Patagonia, Cape Verde, Vietnam, Brazil and Alaska among them. That’s an average of 20,000 nautical miles a year.

The Greens got into yachting 27 years ago and have had only two captains and two yachts during that time, but they have seen more of the world than most. Their first yacht was a 32.6-metre classic built by the Vic Franck Boat Company in 1967 (the year they married). Steven first set eyes on it in 1992. He had gone to take a look at an 18-metre Magnum that was for sale and ended up falling for something entirely different to the sleek speedboat. “I was standing on the bow of he Magnum and I looked across and there was this old beautiful wooden boat that went 10 miles an hour [16km/h] instead of 60 miles an hour, but it was magnificent. It was an all-wood yacht designed by Bill Garden. So I bought it on the spot.”

The yacht was called Savvy Lady and he wanted to call it Dorothea. “If you want to be happy in boating, name the boat after your wife,” he says. Dorothea, who is sitting next to him, smiles. “But my wife said, ‘I’m not renaming the boat until you redo the interior.’ It had pink flamingos on the inside. It was very strange. We took the boat to the Bahamas before we redid it. When we pulled into the dock in Nassau, we called the dockmaster and said: ‘This is the Savvy Lady.’ And he called back and said: ‘We have a dock for you, Flabby Lady.’” Dorothea lets out a small laugh and finishes the thought: “That was the end of that.”

Dorothea and Steven met in Miami when they were both 19 years old. She had come from New York and he was a student at the University of Miami. “I was working for the county mayor at the time and she was in the Miss Universe pageant. We met backstage and I realised that she was very (he pauses for a moment) tolerant, and I needed someone to be tolerant with me,” Steven says.

He grew up in Surfside near Miami and, like a lot of Florida kids, he was always around water and boats, fishing with his brother and father. His first big boat, however, was Dorothea. “In those days, a 32-metre yacht was a good-size yacht,” he remarks. “It was all wood, made of double-plank Alaskan cedar.”

Eventually, they did an extensive refit with the yacht’s initial designer and transformed the interior. According to testimonies from the diverse people they hosted over the years, it was charming. Dorothea worked with interior designer Lorraine Letendre, who has also been involved in the design of their homes. Dorothea describes the yacht’s interior in a book she authored about their adventures on board, called My World by Water.

“The Dorothea reflects our nomadic love of art,” she writes. “From the stunning black-and-white Haitian drawings by Philippe Dodard and the rustic Maori pieces to the tank swimming with crystal Lalique fish, it is a patchwork of the world we love.” Art notwithstanding, friends who spent time aboard remarked that the yacht was not about white-glove service, but much more about adventures and getting wet. It was also a place where they could continue to do business.

Steven was chairman and CEO of luggage manufacturer Samsonite in the early days of Dorothea. Friends remember him sitting cross-legged on the floor of the boat, wearing shorts, T-shirt and a baseball cap as he negotiated a deal on the yacht’s telephone. His business background is real estate and private equity and he had great success, but he started out rather modestly. “I remember when we first got married, I said to Dorothea, ‘If I could get a job and make $1,000 a month, we could have a good life,’” he says. “We’ve certainly changed in socioeconomic status over the years.”

As business successes mounted, the Greens became increasingly active in philanthropy. In 1991, they started a family foundation, which is involved in education, public health and childhood issues among other things. The Green Family Foundation made substantial donations to Florida International University, which established the Steven J Green School of International and Public Affairs. Recently a 2,400-seat theatre inside Miami’s Ziff Ballet Opera House was named after Dorothea Green, a lifelong supporter of the arts.

In November 1997, Steven was named US ambassador to Singapore. “I had a good relationship with Bill Clinton in the early days of the campaign when he first ran for office and I was on the president’s export council. I was running Samsonite and Culligan and the president offered me an ambassadorship. My wife and I were 52 at the time; we decided it was a great life change, new experience and we were ready for it. We approached the position as a true partnership – the ambassadorship was a shared responsibility.”

The Greens’ home on land would become Eagle Crest, a house inspired by the architecture of Frank Lloyd Wright, but they decided to bring their other home, Dorothea, to Singapore. It became the starting point for new adventures throughout Asia, to Australia, India and the South Pacific. The boat logged an average of 24,o00 kilometres a year. In her book, Dorothea wrote: “The Dorothea would become an ambassador just as we had, as we embraced our new world by water.”

The Greens remember their time in Asia fondly. “We love Singapore: the people, the energy, the organisation, the forward thinking. It’s a great country,” Steven says. “We had both a great personal experience and a great boating experience in Singapore.”

Another turning point came in 2007 after the Greens completed another major refit. Dorothea was off the coast of Costa Rica, on her way to the Galápagos, and the Greens were in Italy when disaster struck. He was told to call the US Navy and that’s how he found out that the boat was on fire. Fortunately, the crew was safe. “I was on the phone with the Navy while they were being rescued,” he recalls.

For all involved it was a terrible blow. Steven was in mourning (his word) when he looked for another boat. He loves fishing, the peace and quiet of it, and bought a 23-metre Hatteras. “The problem with a fishing boat of this size is when you go fishing, everyone has to go fishing, so it didn’t work out,” he says.

And that’s how Dorothea III came to be. “We followed this boat for almost a year before we bought it. John [Crupi] felt that the boat had the capability to go around the world, to take us to places that we always wanted to go to, and was very efficient, strong, safe; and we bought it.” Captain Crupi was tasked with handling the refit. “John and I had a perfect partnership: he took care of all the mechanics and I wrote the cheques,” he laughs.

Dorothea III has proven to be a worthy explorer as she has travelled through four oceans and more than 75 countries. Fishing is still part of the equation, of course, and for the past couple of years, a Hatteras GT63 named Post One has been following the mothership around the world.

“It’s difficult to choose, but among our favourite destinations were the Kimberley coast of Australia, where big tides flow over the reefs – spectacular,” he says. Another is Tonga, where their grandson caught his first blue marlin and went diving with whales. “On our first trip to Tonga in 2013 we anchored at Mounu Island, which had a small resort and 9.1-metre aluminium boats for whale-watching and swimming,” Steven recalls. “The owner, Allan, was a character out of central casting: tall, thin, long beard and drove with his feet. Behind the typical islander was a person who had a love affair with humpback whales. We became friends, we shared stories and had dinner on his island. Sadly in 2017 Allan passed.”

Dorothea III recently returned to Tonga after spending time in French Polynesia, a beautiful destination with a not-so-appealing plastic problem. The trip inspired a new project to help implement recycling and proper handling of rubbish on the islands. “Over the years, John and [first mate] Jenifer [Mosley] have followed some of the things that the foundation has done, and they came to me with the idea of getting involved with the boat. I thought that was wonderful because it was their idea, not mine, although I totally embrace it and encourage it. And they’ve done a lot over the last couple of years philanthropically.”

The crew of Dorothea III and Post One organise their own fundraisers and work with other organisations. Among these is YachtAid Global, a non-profit based in San Diego and founded by the Greens’ first captain, Mark Drewelow.

For the Greens, yachting has always been about family, experiences and goodwill. “We’ve enjoyed every minute of the past 27 years,” Steven says. Although they are happy to return to a place they’ve already visited because the environment will always be different, the best destination they say, in unison, is “the next one”.

On board with William Heinecke, owner of 28m motor yacht Major Affair