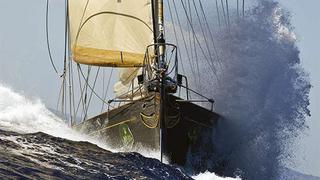 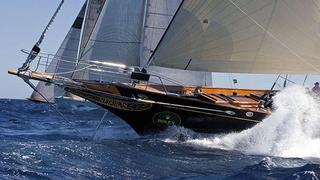 Sailing the Atlantic circuit, Iceland & the Arctic on superyacht Hetairos

Since her launch in 1993, the 42.85 metre Abeking & Rasmussen ketch Hetairos (now Asgard) has sailed approximately 300,000 miles, and has often raced in two regattas every year.

In 2010, she logged two superyacht regattas and 15,000 miles between February and October sailing from the Mediterranean, across to the Caribbean, north to Iceland, the desolate Jan Mayen Island and Spitsbergen in the high latitudes at 80 degrees north, before returning to the Mediterranean and a final, victorious regatta.

As the yacht's winter refit approached completion at La Ciotat, France, a string of deep low pressure systems continued to roll east across the Atlantic delivering fierce storms to western Europe. With the St Barths Bucket firmly in Hetairos's diary, her British captain, Bill Lawrence, was constantly looking for an escape window out into the North Atlantic and across to the Caribbean.

Sailing before a storm

On 10 February, an opportunity arrived and Hetairos set sail with a constant 45 to 50 knots of breeze from behind and gusts peaking at 58 knots.

"There was so much water coming over the back of the boat that a pair of binoculars was lifted right out of the cockpit and a Jonbuoy was torn from the stern," recalls Lawrence.

With the wind forecast to shift to the west, the prospect of beating into a gale was unacceptable and Lawrence stopped in the Spanish port of Mazagón, just west of the Straits of Gibraltar, before another dash in 45 knots of following breeze 350 miles south to the small port of Safi on the coast of Morocco.

The judgement and timing were impeccable for as Hetairos sheltered in Safis port, 400 miles due west in Madeira a storm raged, triggering mudslides and flooding, which caused 32 deaths and around 70 non-fatal casualties.

Once the storm broke, Hetairos set off for Antigua in the Caribbean, stopping for only two hours in Las Palmas in the Canary Islands during the 14-day journey in a southerly breeze with no sign of the usual north-east trade winds.

Arriving in Antigua on 9 March, the crew stayed long enough to set up a storage base and for the yacht's first mate, Adam Williams, to get engaged, before setting off to the St Barths Bucket. The owner and family came on board for the regatta, joined by friends for the final day of racing.

This became a very successful regatta, with Hetairos achieving second place out of 39 entries. It was followed by a short cruise around St Kitts, Barbuda and Nevis. The yacht then returned to Antigua for six weeks of preparation ahead of the long trip north.

Rejoining the crew in Antigua, the owner cruised through the British Virgin Islands to Bermuda before leaving Hetairos and the yacht's core crew - Lawrence, Williams, engineer Sam Parfitt, and deckhand Henry Stell - and two additions for the 2,500 mile voyage to Iceland.

The crew used a two-man watch system of two hours on, six hours off. "We'd sail fairly cautiously," confirms Bill Lawrence. "The crew would usually fly a jib with a jigger from the mizzen and leave the mainsail down. If we were off-wind, we'd leave the mizzen mast bare and sail with a reefed main," he adds.

Remarkably, the boat motored for under three days during the voyage north as Lawrence kept Hetairos east of the Rhumb line, skirting south-east of the Grand Banks: "We wanted to keep clear of any areas of fog," confirms Lawrence.

Sailing a more easterly course, the breeze veered from south to south-east just as Hetairos cleared the Flemish Cap area and turned north-east towards Iceland, supplying a comfortable beam and broad reach.

Although the crew reported very little shipping as the yacht climbed north, they did encounter fallout from the eruption of Iceland's Eyjafjallajökull: "We were sailing through the dust cloud," reports Lawrence. "There wasn't much, but visibility did drop. It was just strange that the boat was getting a little bit dirty right out in the middle of the ocean."

Hetairos arrived on Iceland's northern coast at Akureyri, a fishing port and cruise liner destination at the head of the Eyjaförður fjord. For the entire crew, this was the first introduction to Iceland.

"It was a really good stop over and the people were very friendly. If you needed anything, one of the locals would give you a lift anywhere in their car," says Lawrence.

Having met up with the owner in Akureyri, Hetairos sailed west for 50 miles along the coast into Húnaflói Bay and moored off the small settlement of Blönduós while the owner fished in the famous Blanda River at the height of the local salmon season.

Originally, the plan had been to sail west and explore the east coast of, but a northerly breeze and frequent reports of ice drifting south through the Greenland Sea and into the Denmark Strait, which separates Iceland from Greenland, caused a change of plan.

Hetairos returned to Akureyri for supplies, picking up a load of Russian birch for the yachts log burner and some local delicacies: The Icelandic writing on all the food packaging was a little confusing, admits Lawrence. It took us three days to work out we were eating whale and seal!

With a French ice pilot, Eric, added to the crew, Hetairos headed further north to the Svalbard Islands of Spitsbergen and Nordaustlandet, making a brief stop at the small and desolate island of Jan Mayen, 360 miles north-east of Iceland.

"It was just a speck in the ocean with a Norwegian weather station," says Lawrence. At 34 miles long with the 2,277 metre Beerenberg volcano at the northern tip, the island is a formidable landfall.

"It's very steep-sided and if you arrive there in the wrong weather, the chances are you won't be able to land. The owner and crew were given a guided tour of the weather station, but the scenery was bleak. We only glimpsed the volcano once," the captain confirms. "On average, the peak is only visible on three days each year."

As the yacht moved north, the number of private and commercial vessels reduced dramatically.

"It was unusual to see a boat like Hetairos that far north," says Lawrence. "Other than icebreaking mini-cruise liners, there were some 12 metre yachts being cruised by couples."

On board Hetairos, life was comfortable. "It wasn't ever that cold and the log burner kept the boat extremely warm," he continues. "With the water temperature between one and three degrees, you certainly wouldn't want to fall in, but we did notice that the watermaker would only function at half capacity. There was really no hardship."

Landfall was made in Spitsbergen's capital Longyearbyen on the north-west coast. It was here that ice pilot Eric and the background work done for Hetairos by Richard Hawthorn's Arctic and Antarctic sailing support company High Latitude, became extremely useful.

"If you stay within a settlement's limit, you don't usually require special visas or permits," explains Lawrence. "Once you leave town, it gets complicated."

The threat of polar bears is taken seriously, so an armed guide is mandatory. "They're there to fire a warning shot to scare the bears, or, in the worst case, shoot to kill. Fortunately, the need never arose. We did see a family of five polar bears feeding on a whale carcass," adds Lawrence.

With racing at the Maxi Yacht Rolex Cup in early September a set date in the yachts programme, 4,000 miles away to the south, there was time for one more trip. So Hetairos sailed out of Longyearbyen, around Spitsbergens most northern headland, Verlegenhuken, crossing 80 degrees north and sailing south-east into the Hinlopenstretet channel between Spitsbergen and Nordaustlandet.

It was really very spectacular, says Lawrence. The channels shores are encased in ice with the Valhallfonna glacier on the western Spitsbergen shore, and the Vestfonna and Sørfonna glaciers on the Nordaustlandet shore.

"The channel became choked-up with ice and bergy bits fairly quickly," says the mahogany-hulled yacht's captain without flinching. "The glaciers were constantly calving off into the water."

The trip south to the regatta in Porto Cervo, Sardinia, was broken with a brief stop in the captain's home port of Lymington on the English south coast to prepare Hetairos for the Mediterranean.

While in the Med she raced with 20 crew and took first place in the Supermaxi Class.