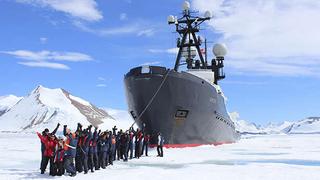 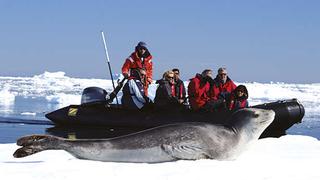 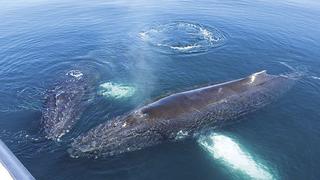 Superyacht Arctic's owner on planning the perfect voyage to Antarctica

Under an impossibly blue sky, the motor yacht Arctic powers her way at a steady six knots through the 40 to 50 centimetres of fast ice in the frigid waters of Bourgeois Fjord, Antarctica. Before her the beautiful mountains of the Antarctic Peninsula rise as a barrier to the Weddell Sea, with only the wisps of cloud on their ridges betraying the strong katabatic winds raging high above the vessel. As Arctic draws abreast of an iceberg providing refuge for a couple of crab-eater seals, the captain throttles back, glides to a stop and signals ‘finished with engines’. Silence

Silence, however, soon gives way to cries of joy. Arctic has arrived at 67.50 degrees south, thereby setting the record for the furthermost southern latitude of any private expedition vessel on the Antarctic Peninsula in recent years. Surrounded by ice, she looks entirely within her element. Soon, guests and crew step on to the ice for photographs and a giddy toast to their capable vessel. Halfway into a 3,500 mile odyssey a year in the making, the captain and the expedition leader exchange knowing looks and proud smiles; Arctic has truly arrived in Antarctica.

The last continent discovered, Antarctica is by far the most pristine, and is considered by many as the rite of passage into the world of bona fide expedition cruising. Synonymous with the iconic explorers Amundsen, Scott and Shackleton, Antarctica offers unsurpassed scenery, wildlife, icescapes and a sense of exploration and isolation rarely found in today’s world. Only a tiny percentage of the worlds superyachts come here, and they rely heavily on specialist guides to help navigate these waters safely and look after them when ashore. EYOS Expeditions runs about 20 expeditions per year to remote polar and tropical destinations.

Arctic’s journey began a year earlier with a meeting between her captain and Rob McCallum of EYOS Expeditions. As a result, I requested preparations for an Antarctic voyage encompassing the Falkland Islands, the remote wildlife paradise of South Georgia and the full length of the Antarctic Peninsula. ‘Arctic is a great vessel,’ says her captain. ‘She was constructed with an Ice Class and endurance of more than 8,000 miles. She is a private yacht, but the facets of luxury are built over a solid foundation of strong and proven performance. She is ideal for polar cruising or exploring remote coasts.’

Arctic was built by Schichau Werft in Bremerhaven, Germany, in 1970. At time of launch, Arctic and her identical sister Oceanic were the strongest and largest all-weather salvage tugs in existence and both had distinguished international careers. Arctic has even been to Antarctica before; in 1972 she famously rescued commercial expedition vessel Lindblad Explorer, which had run aground at Plaza Point.

We purchased Arctic in 1993 and from 1994 to 1995 undertook an extensive rebuild and conversion in Malta, overseen by Claus Kusch, to make her into a private yacht. Several refits and upgrades have yielded impressive results. The 88-metre, Ice-Classed hull (GL 100 A4 E3) complements a robust structure, a 17-knot cruising speed, classic lines and modern facilities. She is at home as much in the tropics as in the polar regions. Power is provided by her twin supercharged Deutz SBV 12 M engines producing over 9,700kW.

All this gave us great confidence as we prepared for our voyage. EYOS would lead the expedition; over the previous year, it obtained permits and permissions, undertook a technical evaluation of the vessel to determine its suitability for polar waters, produced a full itinerary and technical schedule, and sourced specialist equipment. Arctic’s crew transformed the vessel from ‘tropical mode’ (after a stay in French Polynesia) and prepared her for polar cruising.

A key task was offloading and storing kit: 11 jet skis, four 12-metre tenders and two nine-metre tenders. Just one of the 12-metre tenders was retained and two Zodiacs brought on board. ‘Whilst Mk4 and Mk5 Zodiacs are rare in yachting, they are proven workhorses of the polar regions,’ says the captain, ‘easy to launch and recover and at home in ice as they are on a rocky shore.’

‘We supplemented the Arctic’s crew with an ice navigator, an expedition coordinator and a naturalist,’ says McCallum. ‘Any voyage to the high latitudes takes a vessel towards the limits of its capabilities, so it’s important to have solid polar experience on board. There is no substitute for decades of experience in and knowledge of these regions. Our ice pilot for this voyage, Captain Alexander Golubev, has three decades of polar cruising experience to draw on; that’s a powerful supplement of knowledge to any bridge team.’