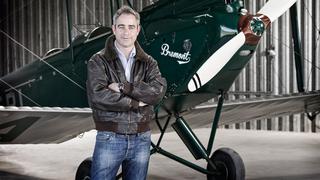 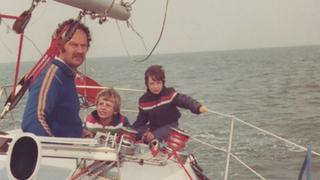 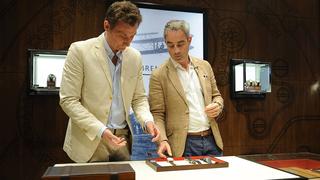 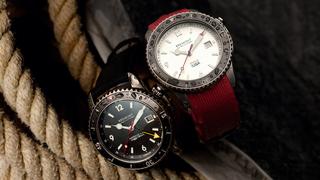 Giles English and Bremont are part of America's Cup history - much to his surprise he tells Peter Howarth...

English by name and self-deprecating by nature, Giles English seems almost bewildered by his small British watchmaking company’s participation in sailing’s highest-profile global circus. He is one half of the fraternal duo that founded Bremont in 2002. So how exactly did it become the official timekeeper of the America’s Cup?

“We were approached by Russell Coutts, who heads up the America’s Cup, and Larry Ellison [head of Oracle Team USA, the holders of the trophy] and they said: ‘Do you want to be the timing partner of the whole America’s Cup?’ And we thought this was a joke. This is a job for the big boys, surely?”

They weren’t joking and Bremont, somewhat unusually, is now not only official timekeeper of the whole event, but also the watch sponsor of Oracle Team USA.

“Larry loved what we were doing and said: ‘I want to tell the history of the America’s Cup: obviously the first race was in England, in 1851, and there’s this amazing history. You’re very good at telling historical stories so would you do an America’s Cup collection?’”

To put this into perspective, previous timekeepers for the Cup have included global brands such as Louis Vuitton, and among the other team sponsors in the current competition, the 35th, are the Swiss watch companies Ulysse Nardin and Omega.

The tale behind the founding of Bremont is a great, though tragic one. The boys’ father, Euan, was an engineer, former RAF pilot, successful businessman and, in later life, restorer of vintage aircraft. He was flying in an aerobatic display in 1995 with Giles’s elder brother Nick in a WWII Harvard when he crashed. The accident proved fatal for Euan, the pilot, while Nick was badly injured, breaking 30 bones.

The death of their father prompted the boys to give up their jobs in the City of London to run the family aviation restoration business and then, in 2002, to launch Bremont. The name comes from a French farmer in whose pea field the brothers once had to make an emergency landing. Monsieur Bremont, a Second World War pilot himself, showed them great hospitality and reminded them of their father. When they were struggling for a name for their company they remembered him and decided to commemorate their meeting.

Since then Bremont, which has its base in Henley-on-Thames in Oxfordshire, has flourished and today has stores in London, Hong Kong and New York. Its watches manage to be both rugged and sporty, elegant and dressy, a combination that gives them a very particular, and peculiarly British aesthetic.

Other stories to which the brand can lay claim include creating a new collection of watches for the 2014 British spy film Kingsman after its director Matthew Vaughn and his wife, supermodel Claudia Schiffer, came into the brand’s Mayfair store for a browse. There have also been special-edition watches for flying regiments (English gets sent “selfies” of servicemen’s wrists sporting Bremont watches in the cockpits of jets and even U-2 spy planes) and a series of limited-edition models that incorporate small pieces from historic machines. These have included the first powered aeroplane (the Wright Flyer), a 1944 Mustang, a famous 1942 Spitfire Mk V and – switching to a nautical theme – even Admiral Nelson’s HMS Victory.

Given this history of creating commemorative pieces, it’s no surprise that English took up Ellison’s idea of celebrating the America’s Cup with the launch of a dedicated collection of watches. And, as English explains, the water is not such alien territory to him. “Bremont is known for its aviation but I actually trained as a naval architect and, when we were kids, Dad built a boat for us to live on. We’ve always loved sailing and I was convinced that this America’s Cup was going to be on a different level.

“I’m obsessed by the whole period of the Cup in the 30s and 40s and the J Class yachts that competed, especially Endeavour, the British J Class that almost won and was owned by Thomas Sopwith, the aviation manufacturer who was an obsessive sailor. So we designed one watch that tells the story of that classical elegance of the America’s Cup.” This – the AC I – is a polished steel dress-style watch. The AC II comes as a chronograph in rose gold. There’s also a sports style, the stainless steel, water resistant to 500 metres Oracle I, which is worn by the US America’s Cup team. There’s a GMT second time-zone model, too – the Oracle II – made from aviation grade titanium. “These are sailing watches – Faraday cage, vibration mount and purely mechanical – it’s all very technical, very lightweight; they’re very robust, made using really interesting materials,” explains English.

The two models of Bremont America’s Cup watches perfectly embody the duality at the heart of this company. On the one hand there is real respect for and love of heritage, and a desire to place Bremont within the history of precision watchmaking. On the other, there is a fascination with new technology and an enthusiasm for pushing the boundaries.

Indeed, for Bremont, whose tagline is Tested Beyond Endurance, the America’s Cup is really one big R&D laboratory. “This is the only team extreme sport. These guys are sailing 45 knots in an amazing piece of kit,” explains English. “The wing sails have all been built by Airbus and so aviation and sailing are really connected here.”

Of the crew of Oracle Team USA, English says: “They are perfect ambassadors because they’re sailors, they’re engineers, they’re adventurers.” A bit like the man himself.

The Best Racing Watches For This Year's Grand Prix