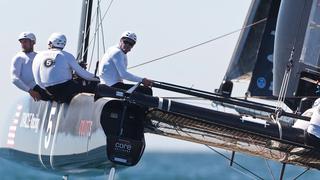 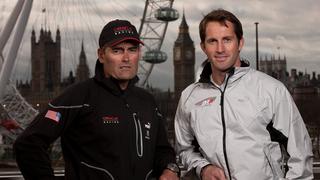 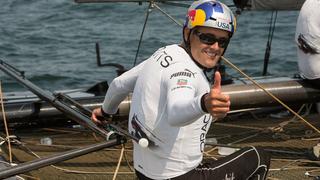 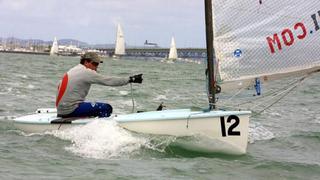 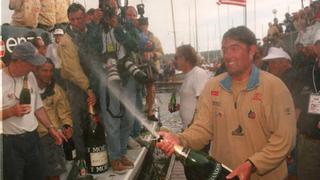 Why Russell Coutts thinks Britain could win the America’s Cup

Russell Coutts has earned the right to be a lot more intimidating than he is. This, after all, is the most successful America’s Cupper in history, as both sailor and CEO, the mastermind of arguably the most thrilling comeback of any sporting event ever and the man who annihilated Dennis Connor’s Stars & Stripes team in 1995, sailing the Auld Mug away from US soil for the first time since 1983. He won the Cup again as skipper in 2000 and defended it in 2003.

Moving shoreside as CEO, he led BMW Oracle Racing to victory in the 2010 Cup and repeated the feat when he won the 2013 America's Cup with Team Oracle USA, coming back from an 8-1 deficit to clinch victory 9-8. History says he’s invincible – he’s never actually known defeat in the America’s Cup arena.

So it’s refreshing to find not even the hint of a strut as we meet in a trendy North London hotel. He welcomes me to his table with a big Kiwi grin, then it’s straight down to business: who would win on the water – him or Ben Ainslie, both famously gold medalists in the Finn class at the Olympics? Coutts laughs, “Come on. I won, in what, 1984? He’s won four gold Olympic medals and a silver.

I don’t even compare with him in terms of Olympic sailing. He’s got by far the best record in sailing, and I don’t think it’s the end of it yet. He’s got all the skills needed to lead a team. He’s got the respect and technical knowledge.”

Never has there ever been a British bid that has this chance of winning.

And Coutts would know. He was the man who threw Ainslie onto Oracle’s boat as tactician when it was all one-way traffic for Emirates Team New Zealand in the 2013 Cup in San Francisco Bay. With Ainslie in the game, Oracle clawed back ground and racked up victories: from 5-0 down, it went to 6-0, then 6-1, 7-1, 8-1 – but then came an extraordinary run of eight victories in a row for Coutts’ team.

“I don’t think there are many people that could have jumped on the boat like he did. He hadn’t even looked at the software beforehand, so he was running around the day before the first race trying to learn it all, which is critical because you’ve got all the electronic boundaries and that sort of thing. And he and skipper Jimmy Spithill hadn’t sailed together before and I don’t think he’d thought about doing tactics until being placed on the boat. He had hiccups in the early races but by the end of the series he was totally dominant.”

This all bodes well for the best organised and financed British assault on the Cup in its history. The prospect of Ainslie and Coutts going head to head is mouthwatering. Coutts makes no bones about Ben Ainslie Racing being a threat to his team’s dominance. “Never has there ever been a British bid that has this chance of winning. What the Cup needs is not a whole bunch of uncompetitive teams, but more competitive teams, so you get great racing. Ben Ainslie Racing is going to be around for a long time and it’s going to be competitive, just because of the sort of guy he is.”

If 2017 is shaping up to be the most competitive Cup in recent history, it will also be the most commercially driven, with NBC recently securing the rights to broadcast it in the US. Coutts is leading the charge on the commercial front, wearing two hats as boss of Oracle and director of the America’s Cup Event Authority.

He himself sees no conflict of interest: “What we’ve done is separate the competition side from the commercial side and most people don’t understand this. On the competition side, it’s one vote per team, but on the commercial side it’s not a bad idea that one entity controls the rights because it’s the fastest way to move things forward.” And things are moving fast, helped by the partnership organisers have forged with the government of Bermuda, which won the bid to host the 2017 America's Cup event.

“We didn’t even consider Bermuda at first. But the more we went through the venue process the more it became a real possibility. It’s got limitations in things like accommodation, but when you look at timings for broadcast for Europe – and most of our event sponsorship will be European based – that becomes a very important factor. And if you look at the major markets in the US, the East Coast is still by far the strongest. When we announced Bermuda, there were a lot of very happy people on the East Coast of the US,” he says.

The timing of the event in June is crucial too – the result of a big lesson learnt from 2013. “Last time, a group of sailors and other people decided September would be a very good time to run the Cup. And guess what? It was the start of the NFL season, so we had more viewers watching the Newport America’s Cup World Series event than the America’s Cup finals.” Timing it in June will also catch a lot of yachts transiting back across the Atlantic for the Med summer, and this is a key target crowd for Coutts. For the first time in 80 years a J Class regatta will take place between the Cup playoffs and finals.

It’s hard not to believe the hype: Coutts’ vision and focus for the Cup are singular. It’s all born of a simple philosophy, one he shares with the owner of Team Oracle USA, Larry Ellison. “I asked Larry a few months ago, ‘How did you do it in business?’”, Coutts says, “he started giving me some long explanation and got quite technical and it must have been pretty obvious that my eyes were glazing over because he stopped and said, ‘You know what? Forget everything I’ve just said. All that stuff doesn’t matter. There’s one thing: never give up.’ And I think I’ve been pretty determined, too.”

Determined enough to get back on the water racing? That’s something he’s more than happy to leave to the younger guys, even if he admits to feeling that twinge every time he sees his team screaming along at 45 knots: “Are you kidding me? Being out there would be freakin’ awesome.” And you suspect that if he did take the helm again, it would still take something pretty special to upset his extraordinary run of victories.