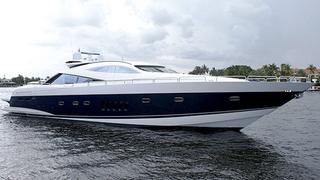 $300,000 price reduction on superyacht Once Around at Fraser Yachts

News just in from Josh Gulbranson at Fraser Yachts of another price cut, this time of $300,000, on his central listing, the 28.96m motor yacht Once Around.

Built by Sunseeker in 2004, Once Around sleeps eight guests in a full beam master, VIP and two twin cabins, while twin 2000hp MTU engines give her a cruising speed of 30 knots.

She was refitted in 2009, including new teak decking and a hull paint job, and her engines having the MTU W-5 service.